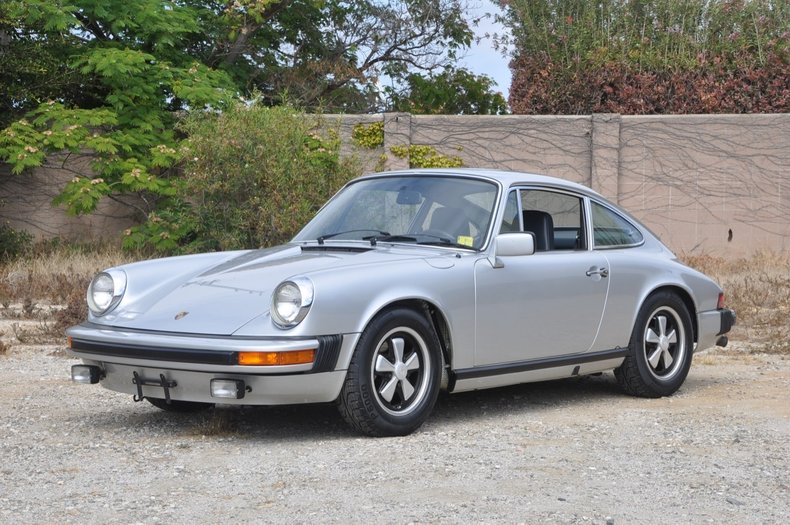 On September 26th, 1976, Walter “Jake” Petersen walked into Cantrell Porsche/Audi in Bakersfield, California and made the second biggest purchase of his life. He and his wife Donna plunked down over $15,200 for a new Porsche 911S. The car was equipped with optional Silver Metallic paint, Koni Suspension, Fuchs forged alloy wheels, Fog Lights and Power Windows. He and Donna didn't drive it much, but took care of it well. Documents show the car driving just 27,070 miles through 1998 when he parked it during an illness. Jake recovered, but never uncovered the car after that. In late May of 2016, Jake and Donna decided that it was time to move on. Everything in the garage had to go and that included the old 911S.

European Collectibles acquired the 911S and painstakingly went through the car. The brake system was renewed. The old Koni's were removed and placed in the boxes that the new Koni's came in. The oil from the engine and transmission was drained and the fuel system was cleaned. Once retarted, the engine did not smoke and the compression and leak down measured as new. Upon road testing, the 911 was free of squeaks and rattles and drove like a low mile original car should.

Now as for the condition of this car, it has been described as astonishing! Every inch of the paint is original and this has been verified by expert eyes and two paint meters. Silver paint of this era rarely lasts longer than 20 years without checking and fading, but Jake and Donna's car shines like it came off the showroom floor yesterday! The interior is absolutely flawless. There's not a wear mark, rip, tear, hole…nothing. The carpets are still plush as they were in 1976 and frankly, we've seen only a couple of cars in all the years we've been selling classic Porsche's that are this well preserved. This car could very easily win a nation Porsche Parade overall in preservation class.

You will like how it looks, but the drive is even better. That broken in feel is what we are talking about. Nothing has worn out yet. Yes there is a set of new Koni's and Pirelli 185/70-15 P6000 tires, but this just makes the drive better and driving this car was described as, “smooth as butter”! The car appears as new. Come and see this car in our showroom and you'll get a dose of what it was like to see a brand new 1976 911S. Back to the Future…