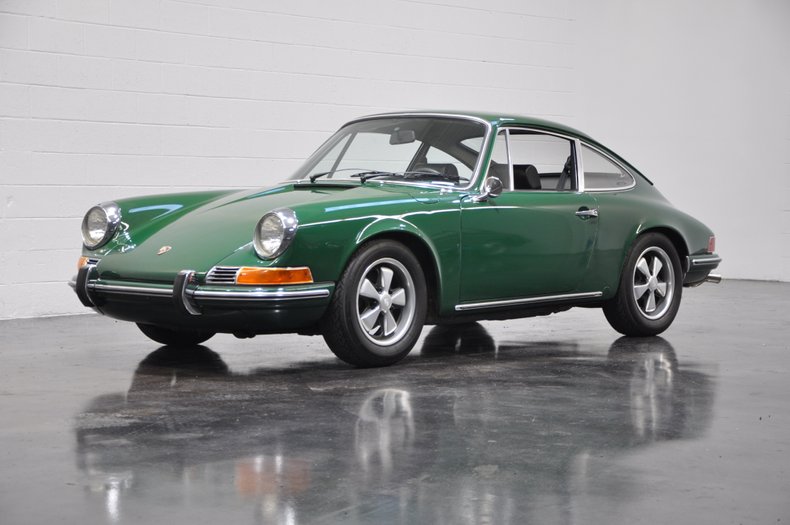 On 12/12/1969 the 911T Coupe was first purchased by, Saul Fisher, who was from Portland, Oregon. Mr. Fisher had ownership for about one year and sold it to Sol Riffel, who purchased on 5/22/1971. Mr. Riffel owned this 911T for 22 years until 1993, he had it repainted in 1991. As history indicates it went through 4 more owners who all resided in different areas of Oregon and ultimately landed in the hands of Walter Boehringer, a Southern California resident. Mr. Boehringer decided to spend the time and effort to restore it to its original state. With originality being paramount, parts of the 911T have been refurbished and not replaced to maintain the integrity of the original parts. One of these restorations includes a full rebuild of the original suspension. Mr. Boehringer took it a step further and installed a 911S front sway bar, new stainless steel heat exchangers, and a Scart sport exhaust. These improvements add to its already great performance and appeal without deterring from the originality. Fully restored Fuch wheels with Pirelli Cinturato tires and refurbished the original vinyl seats. All original parts with an exceptional original interior. The dash is in superb condition, original panels, and excellent door gaps all around. There is no evidence of rust present and no signs of accident damage. Runs and drives phenomenally and she is a very presentable driver. Meticulous records were kept, and this exemplifies how much love the car received. Original engine, original transmission, along with its original color (Irish Green/6806). This 911T is known by its owners for its reliability, lightweight, and its aesthetic simplicity.

One of 3,561 Karmann coupes produced and was Porsche's first year of 911T production. Outfitted with a 2.0L engine, 5-speed manual, and nets 110 horsepower to the wheel and is a presentable driver. This was the only year Karmann built the long wheelbase 2.0L 911T, making this car a rarity amongst Porsche enthusiasts. The extension of the wheelbase by 60mm represented the first major revision of the original 911 design. Production of these 'B Programme' cars, as they are known, began in August 1968. Karman was involved in their production for only one year, during which time the Osnabrück firm built 3,561 911Ts. It has the lightweight magnesium crankcase, introduced on the 'B Programme' cars, which helped give the long wheelbase 911 much greater cornering stability compared with the preceding short wheelbase cars. This vehicles magnesium crankcase is considered to be one of the oldest known survivors that carried over the '1.1R' casting part number from the preceding aluminum crankcase. Nevertheless, it still retains most of its original details such as the one-year-only engine deck lid, basket-weave dashboard, dual 40mm triple-throat Weber IDA carburetors, rubber bumpers and Fuchs wheels. This 911 also has the desirable 901 dogleg five-speed manual gearbox.