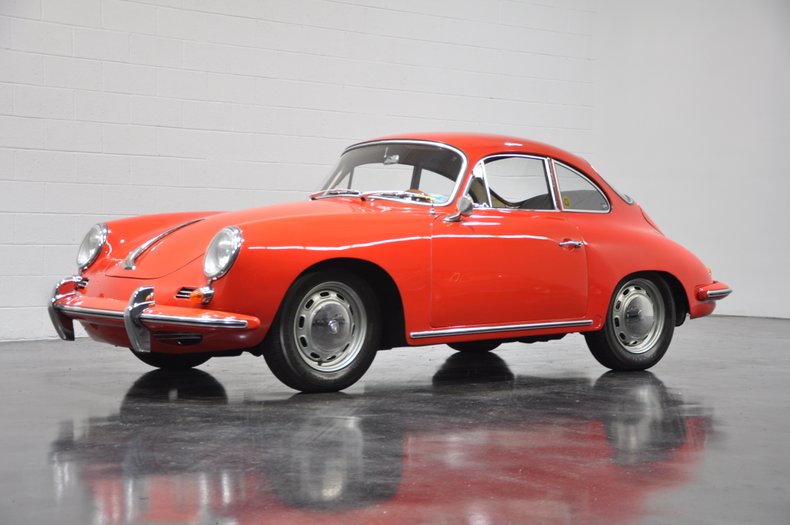 Four (4) owners with records showing Mr. Brooks bought this 356 from the original owner in 1965. Mr. Brooks was from Kansas and had the vehicle for about five years and serviced it regularly until he sold it to the 2nd owner. Service records date back to 1971, showing regular maintenance. The 2nd owner, from Missouri, had this vehicle for ten years and then sold it to Mr. Bogle. The current owner purchased this 356 in 1981 and decided to go through a full restoration to bring it back to its original condition.

The restoration includes mechanical, paint and upholstery and is documented. The engine rebuild was done by the late Harry Pellow, a well-known Porsche 356 Guru, owner of HCP Research. By 1986 the engine was masterfully finished. During the same time the body was being prepped and repainted in its original color (Signal Red) and after the paint work was complete new upholstery was installed. This is a great turn key matching number 356 that is a joy to drive and is in wonderful condition.

We have confirmed with Porsche Cars of North America that the engine is original to the car.

Known internally as the T6 and designed by Erwin Komenda, the Porsche 356C came out for the 1964 model year. External changes were minimal in typical Porsche fashion, but with the 356C a Porsche finally had disc brakes front and rear. Another notable change was the newly redesigned wheels and hubcaps. The Porsche 356C was the final Porsche model to debut before the completely new 911. It therefore mainly featured mechanical rather than aesthetic improvements. One of these mechanical changes was the addition of an outside fuel filler flap. The 1964 and 1965 cars culminated with the pushrod-operated SC engine and the complex quad-cam Carrera 2 unit.