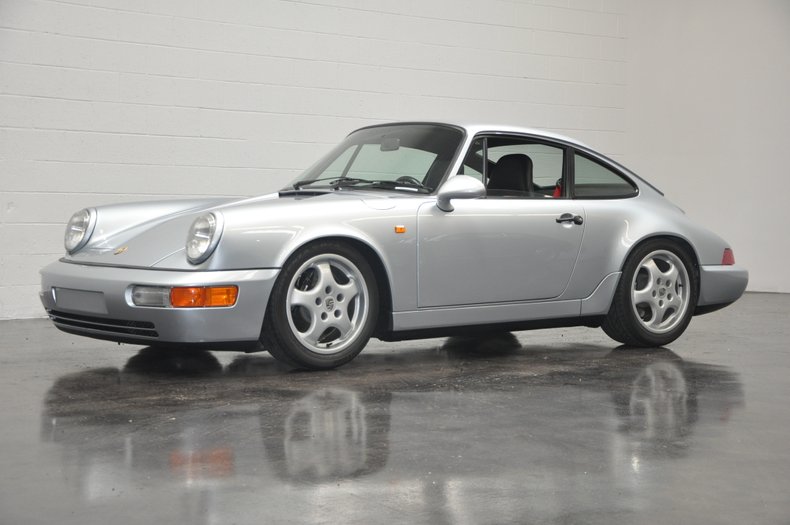 In 1992 Porsche began producing a stripped out, lightweight version of the Carrera 2 based on the 911 “Carrera Cup.” As it was not sold in the U.S. due to the extremely aggressive tuning, very few original European-specification cars made it into the States.

Chassis number 490667 is one of those rare cars, recently imported this year to North America. Like all Type 964 RSs, this car is equipped with the M64/03 engine – a revised version of the standard 3.6-liter flat-six, which produces 260 bhp. The lightweight Carrera RS was created by stripping out the interior of needless creature comforts; owners had to option back in power windows, rear seats, stereos, and air conditioning, if desired. With a seam-welded chassis, a hood made of aluminum, and magnesium wheels, even more weight was decreased. In total, the Carrera RS is approximately 345 pounds lighter than the Carrera 2 model upon which is it based.

As it was prepared for the Japanese market, the Certificate of Authenticity for chassis 490667 notes that it was originally fitted with specific equipment for Japan. Also ordered with limited-slip differential from new, additional features included five-speed transmission, bucket seats, 17-inch Cup wheels, and Yokohama tires. Finished in the original colors of Polar Silver Metallic over Black/Grey Leatherette with leather seats, this Carrera RS remains in excellent condition inside and out. Recently the undercarriage, paint, interior, and even suspension has been meticulously detailed by Canepa Design to ensure that this stunning Carrera RS is absolutely spotless throughout.

Offered is a chance to own one of the rare original Carrera RSs not originally available in the North American market – one of the most sought-after modern normally aspirated 911s.