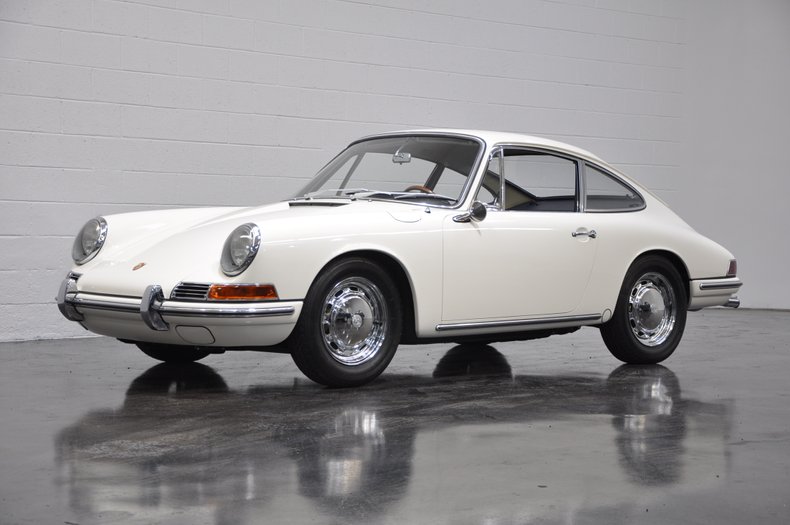 European Collectibles did an exquisite restoration on this 1965 Porsche 911 Coupe over a 2.5 year period from 2015 to 2018. During the restoration, this 911 was completely disassembled so that every aspect could be properly addressed. The 911 was stripped down to the tub and it is a perfect rust free example with no accident damage and all original decks & doors. Everything has been rebuilt including the 1991cc engine, 901/0 manual 5-speed transmission, and four-wheel disc brake system and NOS parts. It is in perfect concour condition and is ready for any show. Offered with tools, jack & books and Certificate of Authenticity from Porsche confirming all matching drive-line. Truly one of the best early 1965 911s that you will find with no issues. Everything has been restored; finished in a beautiful color combination - Light Ivory/ Navy-Blue leatherette interior and houndstooth inserts. Beautiful original wooden steering wheel with deluxe horn ring, all the original gauges have been restored with new chrome bezels, all of the chrome has been triple plated and is in perfect condition. Truly one of the best you will find. It performs flawlessly and is a dream to drive!

The early 911 holds a special place in Porsche history, not only as a sales success but also as an icon of minimalist automotive design. It remains a beloved vehicle today, and a well-restored and properly maintained 911, such as this example, is on the wish list of nearly every car enthusiast the world over. This status has also contributed to a meteoric rise in desirability for these cars, as they lead the charge for all 356s and 911s that are gaining momentum in the marketplace. Simply put, no important collection would be complete without a proper early 911, as it is an equal in automotive design and history as the California Spider and 300 SL, but it further benefits from practicality and ease of use, which makes it as perfect for running errands as handling twisty mountain roads. Motoring enthusiasts new to the classic car world are well served to acquire a “blue chip” Porsche such as this.

The earliest editions of the 911 had an air-cooled, rear-mounted, 2.0L (1991 cc) 130 PS (96 kW) flat-6 "boxer" engine, similar to the 356's four-cylinder 1.6L unit. It was mated to a five-speed manual "Type 901" transmission. The car had 2+2 seating, though the rear is very small, also like the 356. The styling was largely by Ferdinand "Butzi" Porsche, son of Ferdinand "Ferry" Porsche. Erwin Komenda, the leader of the Porsche car body construction department, was also involved in the design.