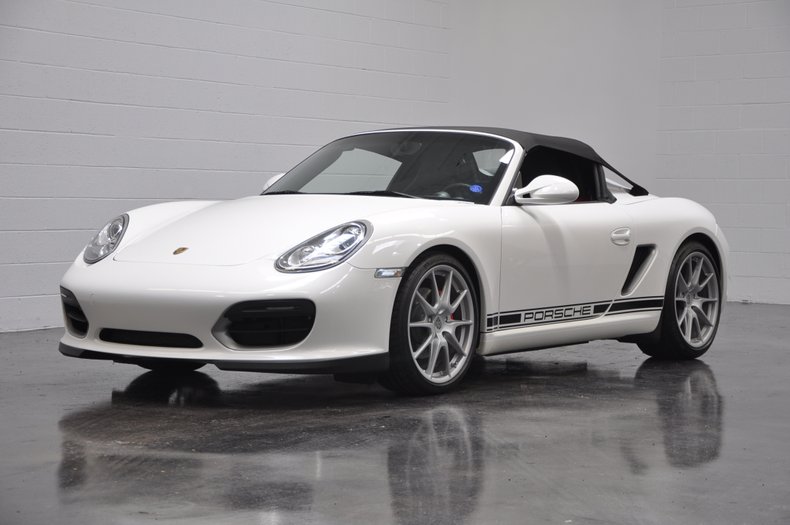 Weighing only 2811 pounds, the 2011 Porsche Boxster Spyder is the lightest production car that Porsche has produced in decades. This mid-engined roadster represents the true, purist form of the sports car - agile, powerful, open and efficient.

The Boxster Spyder features a 3.4-liter six-cylinder engine with Direct Fuel Injection upfront of the rear axle. Maximum output is 320 HP, 273 lb.-ft torque.10 hp more than the 2011 Boxster S. The combination of 10 more hp and 176 pounds less weight than the award-winning Boxster S, plus an all-new sport suspension that lowers the Boxster Spyder 20 mm, a lower center of gravity, a standard limited slip differential, and exclusive wheels provides the kind of driving dynamics that back up the unique look. Aluminum door skins and lightweight interior door panels from the 911 GT3 RS contribute to the weight reduction.

The 2011 Boxster Spyder was heavily praised by the automotive press upon its release. Road and Track referred to it as "the perfect sports car." and described its skidpad and figure 8 test results as "Ferrari 458 Italia numbers for less than a third of the price." Car & Driver praised the acceleration, reaching from 0-60 in an incredibly quick 4 seconds.

This particular Spyder features an extremely rare, lightweight, and highly desirable collector and purist spec, with lightweight bucket seats finished in leather and Alcantara, no radio and no A/C. The vehicle shows extremely well with only 7,011 miles.

Hard to believe but the Boxster line is 21 years old now. When the car launched in 1997, reviews were positive and constantly improved as this car never seemed to disappoint within regards to looks and drivability. With their mid-engine layout and nearly perfect 50/50 weight distribution, it quickly developed a dedicated following. A true, genuine, roadster type sports car destined only to appreciate, this Boxster is a great valued opportunity.