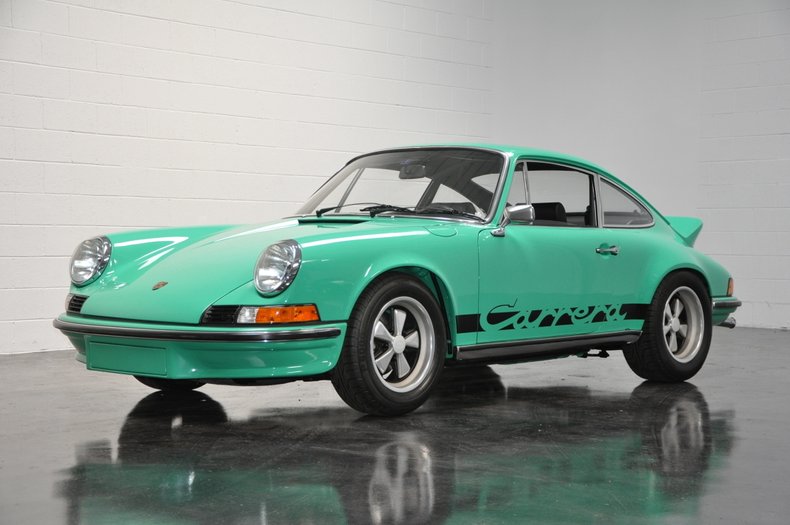 Original delivered to Switzerland and has multiple owners with documentation dating back to 1983. This RS remained in Switzerland for a majority of its life up until 1999 when the RS was imported to California in 2001. In 2002 a complete restoration of the 911 RS commenced. Every aspect of the vehicle was addressed with no expense spared.

Outfitted with factory Recaro Sport Seats with headrests, seat belts, and a retractable antenna loudspeaker and electric windows. A motorsport icon, the Carrera RS is considered by many to be the greatest 911 of all time. Following a complete restoration to original specifications, this example surely will not disappoint. One of the highly desirable, first 500 Carrera RS examples built, chassis number 9113600280 was built to M472 Touring specification and is finished in Jade Green.

This 1973 Porsche 911RS is a multi-award-winning vehicle for its unique style and presence. This first series 1973 RS (#280) was restored cosmetically by Scott St. Jean in 2010. During the same time, Scott Hendry (Scott's Independent) performed a complete mechanical restoration. Once complete the car won the Concours d' Elegance in 2012 and was also picked best of class Porsche 911 for the Wasatch Mountain Classic Car show. In 2017 it won the Post War Sports award, for 1961-1975, at the Quail.

One of the most desirable Porsches ever produced, the 1973 911 Carrera RS was built to allow Porsche to continue its success in motorsport following the retirement of the 917. The goal was to prepare an all-out campaign in the new European Grand Touring Championship Group 5 with a 911-based model called the RSR. To meet the FIA's production requirements, Porsche would have to construct at least 500 examples of a Group 4-legal model with a 2.7-litre engine that could be enlarged to the Group 5 maximum of 3.0 litres. Using the 911 S as a starting point, the Carrera RS boasted numerous changes in an effort to reduce weight and add power. Weighing just 2,370 pounds, the Carrera RS boasted a top speed of 150 mph and a 0–60 mph time of just 5.5 seconds.