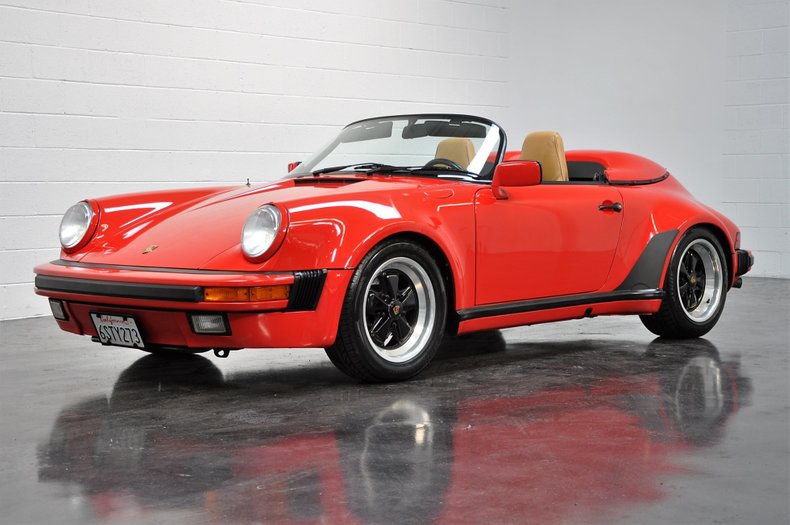 European Collectibles is honored to offer this all-original Speedster once again! The paint is all-original along with the interior, always garaged and meticulously maintained. Very low mileage 19,938 with clean CARFAX!

Completed June 1989 it was number 389 of a limited production of only 823 built for the USA. This model marked the first time that the Speedster name had come back into production in 30 years, as the last production was the 1959 Porsche 356 GT Speedster. Beautiful 911 lines with a factory widebody. Extremely high-powered six-cylinder engine with 217 horsepower @5,900 rpm with 195 foot-pounds torque @ 4,800 rpm HP, this model indeed helped thrust Porsche back to what it once was.

At just 2,690 lbs. the 911 Speedster was 154 lbs lighter than its sister, the 911 Cabriolet. The total build worldwide was limited to only 2,056 examples, which makes the 1989 Speedster more than twice as exclusive as the original that inspired it. The late 80's Speedster was also significant in Porsche history as they are amongst the final products of the original 911 factory in Stuggart, Germany.

The production 1989 Speedster wore a unique aluminum framed windshield that was more than 3 inches lower and raked 5 degrees flatter than that of the standard Cabriolet. Special Speedster equipment.

Some cars are considered collectibles from day one. The limited-production 911 Speedster is one of these cars. It not only celebrated the end of the first generation of air-cooled 911 production, which dated back to 1963, but it evoked the legendary 1954-1959 356 Speedster in name and image. Be one of the few that has this classic in their garage!