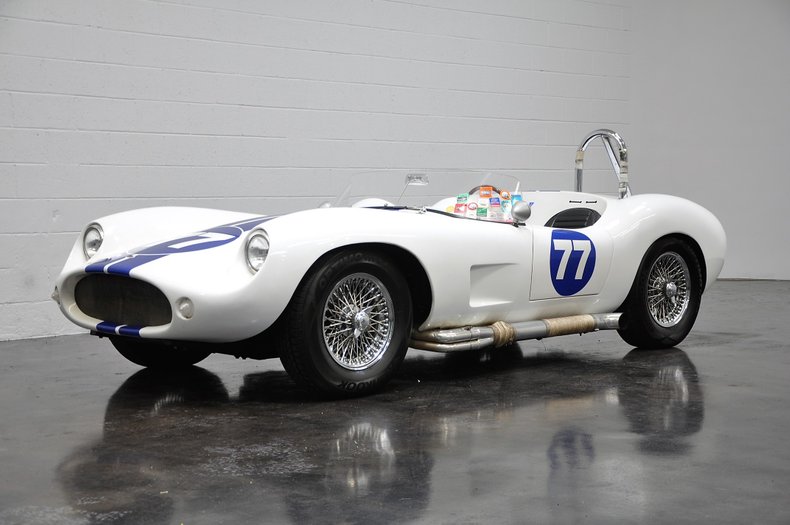 Built fall of 1959 and used as a factory display car.

There were a total of 15 Devin SS chassis made in Northern Ireland that were shipped to the United States and then the engines were fitted at Bill Devin's factory in California. Road and Track tested the SS and it had increasable performance, 0 to 60 MPH in 5.5 seconds. R&T declared the Devin SS to be the fastest road car they had ever tested of its time! The Devin SS was the Pikes Peak winner in its class for three years in a row.

Unknown to many people there were three prototype chassis made in California for the next generation of the Devin SS. #001 is the only known survivor of the three cars and verified with an original letter signed by Bill Devin. This car was originally used as a display for advertising and then sold to a young man in California who had the car for several years. Terry Stokes was the 2nd owner and drove the car for 35 years until 1996 when Bill Devin convinced Terry Stokes to sell the SS to him. Over the years Terry's had won many vintage races and concourse events, documenting the car. Terry assumed that Bill would not sell the car, but less than a year later Bill sold the SS to Steve Young, a board member of the Petersen Auto Museum in Los Angeles. Steve wanted to vintage race the SS and gave it to Chris Wickersham who is an expert in restoring Devin SS's. Chris set up the car for the track with coil over suspension and four-link in the back. Steve successfully raced the SS for many years and he called it his Swiss watch because it never broke down on him. The engine he put in was a Chevy 327 and produced 425-horsepower on pump gas at the rear wheels. With a good driver, this car was almost impossible to beat. The car then passed to Mark Balestra who owned a Buick dealership in Santa Rosa, California. He also raced the car in many vintage car events.

Finally in 2012, Mr. Blue bought number #001 who also owns a 1965 Shelby 289. He says the Devin SS run circles around the Cobra. The SS is in excellent mechanical condition and has no issues. The 4-speed gearbox shifts perfectly like butter and the four-wheel disc brakes stop the car like they should.

The provenance of number 001 may be the rarest of all the Devin SS's ever made. It is licensed for street use, retains its racing logbook and history going back to 1961. It placed first in class at The Quail, in the post-war sports car in 1991. Today it is in perfect drivers condition. Included with the SS is extensive documentation proving the authenticity of the vehicle, The Quail trophy, numerous magazine articles and vintage race photos.

Chassis #DSS-001 is a well-documented vehicle that is well prepared and racetrack ready. The Devin SS used a specially designed lightweight frame, four-wheel disc brakes, rack and pinion steering, independent front-rear suspension, coil over shocks, center lock wire wheels. This car has proven to be competitive in a “blue chip” group with other cars of the era, which included Listers, Maserati Tipo 61's, C and D-type Jaguars, and Ferrari TR250 Testarossas.

Truly a mean machine that you can drive on the street or race on the track this will be a very hard car to beat!