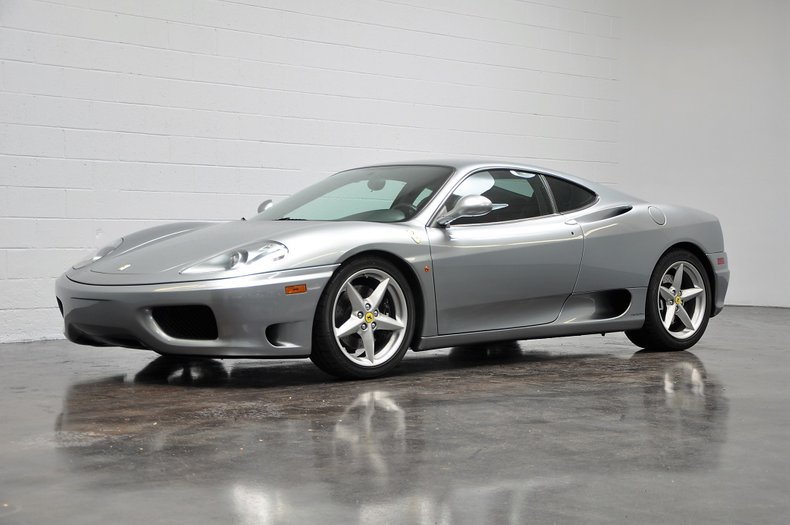 Originally delivered by Ferrari of Orange County March 5, 2003. Finished in a beautiful color combination Grigio Titanio Metallic with a Black leather interior. Original paint and interior, near flawless example that will exceed your expectations. Meticulously maintained and cared for, only 20,812 miles with a very desirable manual 6-speed transmission. Extensive service records with over $20,000 spent on maintenance over the past 7 years with the current owner. 3M Paint protection bra is over the front fenders, hood A-pillar & both mirrors. All original books, tools, window sticker, all keys (one master two slaves), full annual services with belt service March 15, 2017, at 20,448 miles. Most recent service was performed December 19, 2017, with a new clutch installed & full service performed. This 360 is ready to enjoy with no issues.

The Ferrari 360 is a two-seater, mid-engined, rear wheel drive sports car built by Ferrari from 1999 to 2005. It succeeded the Ferrari F355 and was replaced by the Ferrari F430.

Ferrari partnered with Alcoa to produce an entirely new all-aluminum space-frame chassis that was 40% stiffer than the F355 which had utilized steel. The design was 28% lighter despite a 10% increase in overall dimensions. Along with a lightweight frame the new Pininfarina body styling deviated from traditions of the previous decade's sharp angles and flip-up headlights. The new V8 engine, utilizes a 3.6-liter capacity, flat plane crankshaft, titanium connecting rods and generates 395 hp (400 PS; 295 kW). Despite what on paper, looked like modest gains, in reality, the power-to-weight ratio was significantly improved on over the F355, due to the combination of both reduction in weight and more power. According to Ferrari weight was reduced by 60 kg and the 0 to 100 km/h (62 mph) acceleration time improved from 4.7 to 4.5 seconds. The 360 Modena press car was "ludicrously quick and sounded more like Schumacher's weekend wheels than a street car. But the other cars were different. While performance claims for the F360 were equal to or higher than the previous model, when Car and Driver tested a stock 360 it proved heavier and slower than its predecessor's claimed performance from five years before.

There were only 4,199 built for the US market—1,810 Modenas (coupes) and 2,389 Spiders (convertibles). Of those numbers, there were only 469 Modenas and 670 Spiders that were produced with a gated 6-speed manual transmission as opposed to the automated F1 single clutch transmission.