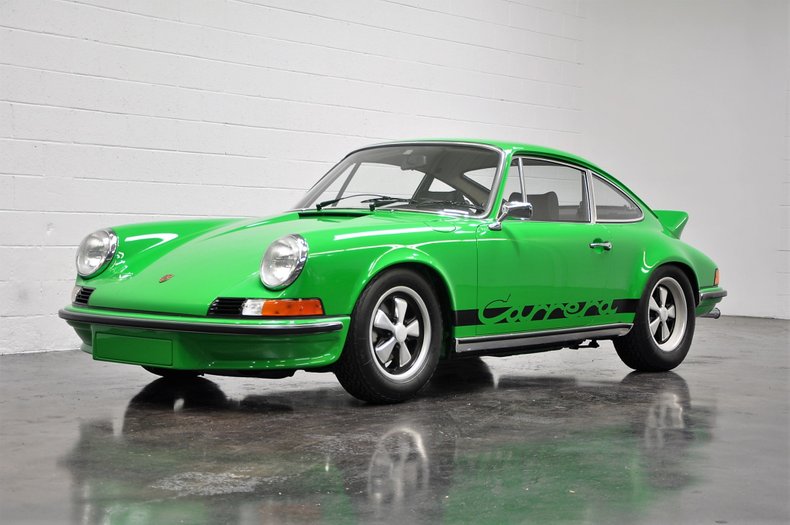 This is a truly amazing example of a 2.7L 1973 Porsche 911 Carrera RS and is nothing short of absolute perfection. VIN#9113600858 was completed in March 1973 for the German market and was built with without any additional options. It was originally finished in Viper Green and fitted with vinyl and corduroy standard seats, just as it is shown here today. Although Viper Green is a very desirable color today, only 60 of the original 1,580 RSs were painted in this stunning color.

Chassis “0858” was built in March 1973 and delivered the following month to a local German named Karl Heinz Hotzel. A detailed ownership of the RS is on file and it presents a clear and known ownership history from new. In 1982, this Porsche was imported to the USA by a resident of Indiana who kept the car for over twenty-four years. It was sold via auction in very nice condition, but was sold to an owner who wanted absolute perfection. To this end, the car was delivered to legendary Porsche Specialists, Jerry Woods Enterprises (Campbell, CA) who commenced a full nut and bolt restoration that included a complete mechanical refurbishment and bare metal paintwork by Bruce Terry. The work began in 2009 and was finished in 2011. The restoration receipts total over $215,000 and the end result is stunning while the performance is staggering. Since completion, this RS has been driven fewer than 500 kms.

The exterior of this RS is nothing short of perfection and its interior is just as amazing. The headliner, dash, door panels, and carpets have been redone to show class quality. The original type seatbelts with yellow stitching are in great condition while the fully restored (double wrapped) steering wheel looks and feels brand new. As great as this RS looks it also runs and drives perfectly with its 915-gearbox able to shift into each gear with ease. We are proud to offer this RS for sale and believe that a high quality example such as this rarely comes to market.

The 911 Carrera RS was listed in 1973 and these models, valued by collectors, are considered by many to be the greatest classic 911s of all-time. RS stands for Rennsport in German, meaning race sport in English. The Carrera name was reintroduced from the 356 Carrera which had itself been named after Porsche's class victories in the Carrera Panamericana races in Mexico in the 1950s. The RS was built so that Porsche could enter racing formulae that demanded that a certain minimum number of production cars were made. Compared with a standard 911S, the Carrera 2.7 RS had a larger engine (2687 cc) developing 210 hp with Bosch MFI, revised and stiffened suspension, a "ducktail" rear spoiler, larger brakes, wider rear wheels and rear fenders. In RS Touring form it weighed 2370 lb, in Sport Lightweight form it was about 220 lb lighter, the saving coming from the thin-gauge steel used for parts of the body shell and also the use of thinner glass. In total, 1580 were made, comfortably exceeding the 500 that had to be made to qualify for the vital FIA Group 4 class.