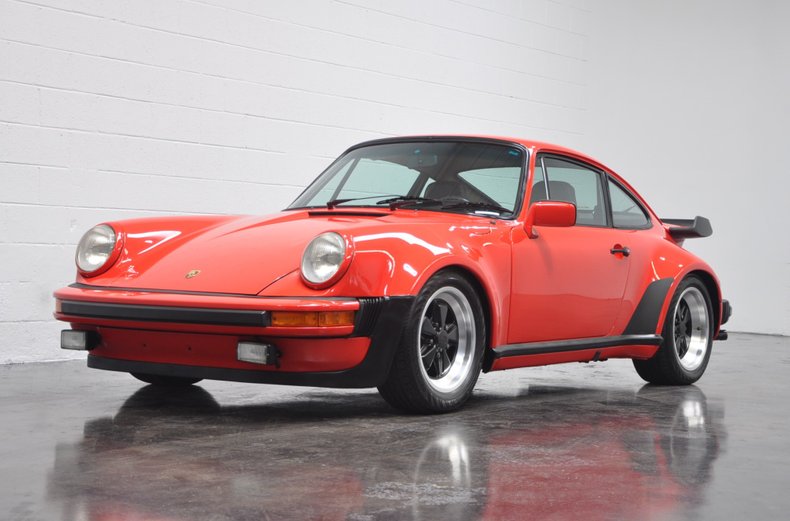 A complete repaint was done in 2014 in Guards Red (027) at a cost of $26,000. The paintwork is stunning and in exceptional condition. The black interior is in very nice condition including carpets, headliner, vinyl front seats, dash, door pockets with all new rubbers. Sunroof delete with more headroom.

The 3.3L flat-six Turbo engine sends all its power to the rear wheels through the four-speed manual transmission. This car looks and sounds amazing! Service records include many upgrades installed in July of 2015 with only 500 miles driven since. Service & upgrades include an engine out service, new K27 Turbo 7200, Bosch fuel accumulator, new Sachs clutch kit, new fuel injectors, ignition wires, plugs, point, dist cap & rotor - $11,000 spent. All electrical and mechanics are in excellent working order. The undercarriage is very solid and honest with a very clean motor and transmission.

The 930's claim to fame was the astoundingly powerful 3.3-liter turbo flat six in back. With a massive K27 turbo, boost comes on like a shotgun blast, which is why these cars have such a split personality. Master it, however, and you'll be at the helm of one of the most potent road cars ever unleashed on the general public, and even today its performance will humble just about everything on the road that doesn't cost $100,000. With gorgeous Fuchs alloys and sticky 15-inch radials, it is ready to be a thrilling daily driver or a stunning track machine, or some combination of the two.

This remarkable 930 delivers every bit of the driving experience you'd expect. Towering power & awesome brakes makes it one of the most entertaining road cars ever devised.

This model year introduced the intercooled version of the 930 with the whale tale that defined Porsche's first supercar. Not only is the 930 a highly collectible car with an iconic look, but it also has the remarkable history of being the only homologated road car to win the 24hrs of Le Mans outright in 1979 by Porsche Kremer Racing. It was at the head of the pack in its day and the performance still impresses today.

There are good arguments to be made that the Porsche 930 (AKA the 911 Turbo) was the first civilized supercar. As reliable as an anvil and the fastest car on the German Autobahns for almost a decade, it proved that high performance didn't have to be finicky. As long as you were skillful enough to drive it to its potential.