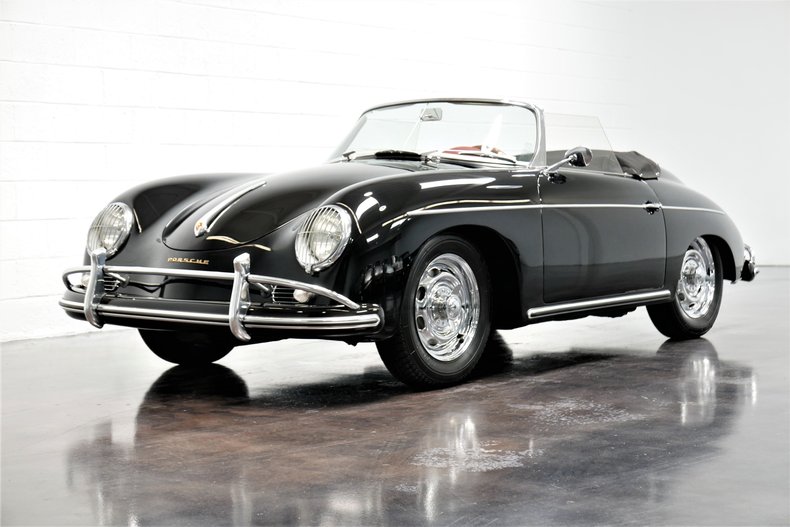 A very attractive Convertible D built by Drauz left the factory on November 25, 1958, wearing Meissen Blue paint (5703 - original color), trimmed and upholstered in Red Leatherette. According to the Certificate of Authenticity, the option included sealed beam headlights and US overrider bumpers. Additional added options include a wooden steering wheel and a beautiful set of Rudge wheels. Chassis number 85763 places it as the 124th ConvD built. The matching 1600cc engine develops 60 horsepower at 4,500 rpm. The restoration was done nearly 20 years ago and was painted in Black with a Red interior but still shows exceptionally well. It is perfect for 356 club shows or to enjoy with the top-down during weekend touring. It is a solid and rust-free example. Recently serviced and is ready to enjoy. Accompanied by the Certificate of Authenticity confirming matching engine, transmission, tool kit and owners manual. ConvD's have become highly collectible, and high-quality examples such as this 356 come to market infrequently.

History
The 1958-1959 Porsche 356A Convertible D model is arguably one of the rarest "production" Porsche 356 models ever manufactured for a full year (T6 "twin grille" Roadster was produced for only a few months). Only 1,331 Convertible Ds were made between August 1958 and September 1959.

By 1958 the Speedster model was four years old and sales were declining. Porsche realized that significant improvements were necessary to attract new buyers, but that there was certainly a market for a "weekend racer" with a removable windshield. The Porsche 356A Convertible D was the solution (though a modern marketing department would have picked a racier name!).

Because overall Porsche sales were growing at a steady pace, and the Reutter coachworks were straining to keep up with the demand, Porsche contracted with the Drauz company in Heilbronn to manufacture bodies for the Convertible D (the "D" stood for Karosseriewerke Drauz KG).

All in all, the Convertible D is a more practical car than the Speedster: a larger windshield, roll-up side windows, and more comfortable seats while retaining the beautiful body lines and the downward sloping beltline that now attracts so many 356 enthusiasts. Of course, some of the minimalist, racier features of the Speedster were lost, and many Porsche purists complained long and loud in 1958!