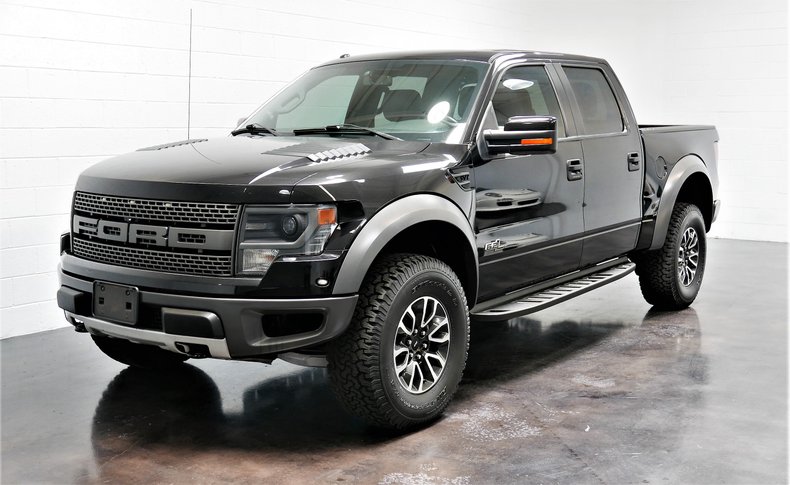 One owner, purchased from AutoNation Ford Katy in Texas on April 12, 2013. Original window sticker with only 26,915 miles. Finished in Tuxedo Black Metallic with a Black interior. The 6.2L 2V EFI V8 engine with electronic 6-speed automatic transmission delivers the power and performance that you would expect. Excellent example and rare to find in this condition with low miles. Ready to tow your boat, trailer or go off-roading.

Options include Equipment Group 801A

For 2010, Ford introduced its second high-performance truck, the SVT Raptor. In contrast to the enhanced on-road performance of the SVT Lightning, the SVT Raptor is focused towards off-road use, in line with that of a Baja 1000 racing truck. While a road-legal vehicle, many design modifications of the Raptor were made to improve its off-road capability, with the vehicle featuring a model-exclusive suspension with long-travel springs and shocks. The Raptor shares only its cab with a standard F-150; to accommodate its larger tires, the Raptor is fitted with wider front fenders, hood, and pickup bed. Initially produced as a SuperCab, a Raptor SuperCrew was introduced late in the 2010 model year. For the first time on a Ford vehicle in North America since 1983, the word "Ford" was spelled across the grille of the SVT Raptor in place of the Ford Blue Oval badge.