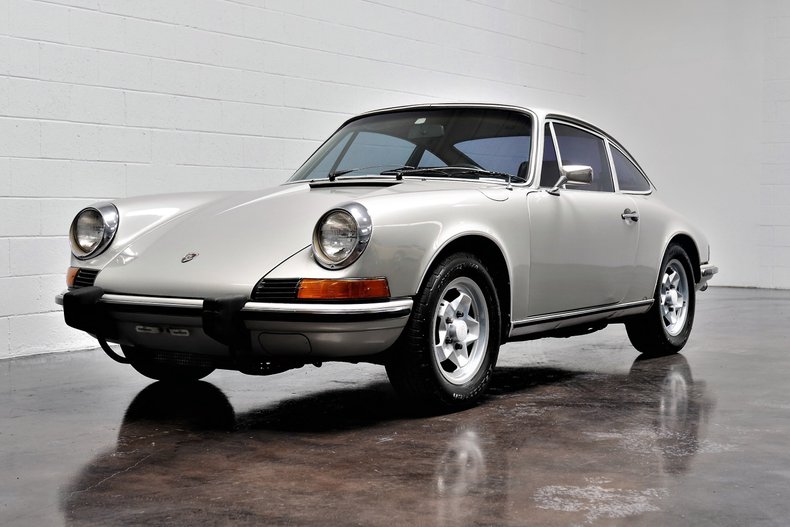 The current owner has had this 911 for nearly 20 years. Over $14,000 was recently spent between 2017 and 2018 for the engine rebuild and transmission work. Exceptional driver with a smooth shifting transmission, four-wheel disc brakes, and very powerful 2.4-liter engine. The last of the desirable early 911's which was the best to drive.

Porsche divided the production of the 1973 model into two segments. They built the first segment of 1973 production in the last half of 1972 with MFI (Mechanical Fuel Injection) and they built the second segment in the first half of 1973 (1973-1/2). The 1973-1/2 was the first Porsche 911 with the Bosch CIS fuel-injection system, which Porsche used for the next 10 years. That CIS system in the 1973-1/2 was only available on the 911T Coupe and 911T Targa, and all of those units were shipped to the USA. Total production for 1973-1/2 911 was only 1,944. All with CIS, 96 of these have Sportomatic. The 1973-1/2 911T is the last model built with the long hood body style, which gave the classic 911 its legendary profile. It is also the last model with the 2.4 engine, one of the most dependable engines Porsche ever built. This 911 is equipped with a Sportomatic 4-speed transmission. It has a torque converter that allows the driver to leave the gearshift in the "D" position and avoid the repetitive clutching in and out in heavy traffic. In normal driving, the driver can shift up or down, but with no clutch. The second the driver touches the gearshift; a microswitch activates a vacuum pump that disengages the engine instantaneously. This transmission was a special order in 1973; it did not prove to be as popular as had been expected with only a small percentage ordered. This is one of 96 made. This is a very low maintenance, easy to care for 911.

The 911E and 911S used mechanical fuel injection (MFI) in all markets. The 911T was carbureted, except in the US where it also used MFI, which accounts for the 7 kW (9 hp) power difference between the two. In January 1973, US 911Ts were switched to the new K-Jetronic CIS (Continuous Fuel Injection) system from Bosch. These CIS-powered cars are usually referred to as "1973.5" models by enthusiasts.