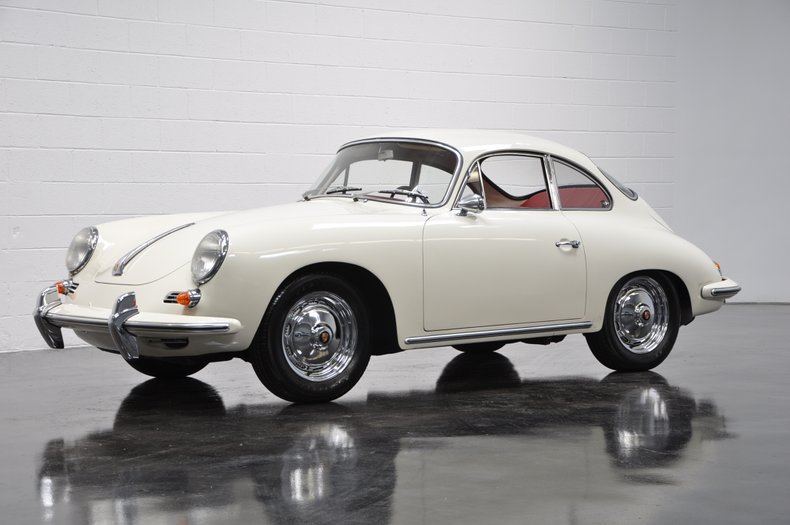 The Porsche 356 is a luxury sports car which was first produced by Austrian company Porsche Konstruktionen GesmbH (1948-1949), and then by German company Dr. Ing. h. c. F. Porsche GmbH (1950-1965). It was Porsche's first production automobile. Earlier cars designed by the Austrian company includes Cisitalia Grand Prix race car, and the Volkswagen Beetle as well as Auto Union Grand Prix cars were designed by the German company.

In late 1959 significant styling and technical refinements gave rise to the 356B (a T5 body type). The mid-1962 356B model was changed to the T6 body type (twin engine lid grilles, an external fuel filler in the right front wing/fender and a larger rear window in the coupé). It is interesting to note that the Porsche factory didn't call attention to these quite visible changes with a different model designation.

Finished in a very desirable color Heron Grey with a Red interior. Fully restored by a Mark restorer in Southern California. Beautifully done including: paint, chrome, rubber, engine, transmission, suspension, brakes and detailed undercarriage. Complete with tools, books and Kardex. This was the last of the 356 drum brake production, special ordered with a 1600cc SUPER engine producing 75 horse power, 741 manual 4-speed synchronized transmission. It is truly an excellent 356 to drive, that is stunning with matching numbers.