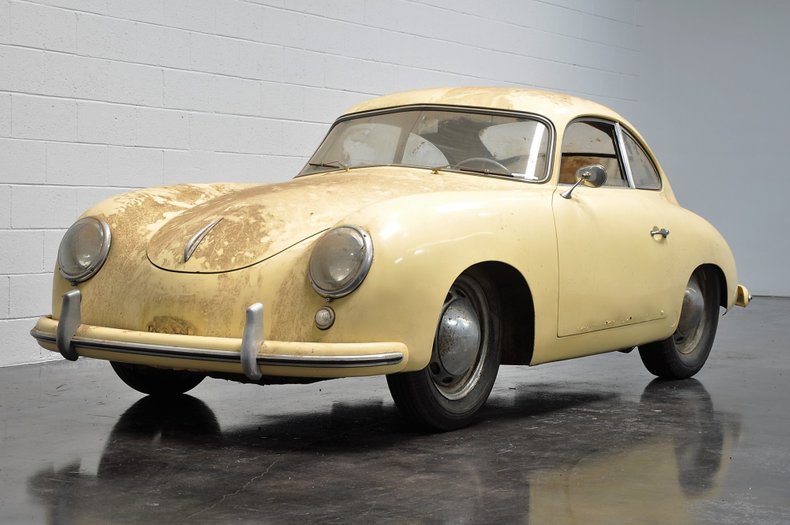 A true time capsule, Chassis #51530 has been stored since 1996 with the same owner for over 45 years. Factory Kardex confirms matching engine and transmission. Apart from a thin repaint in the early 1970's this Pre-A still retains its factory Fashion Grey that can still be seen under the rear deck lid. The interior is 100% original and has an amazingly well-preserved fawn corduroy with blue piping accents stitched into the seats matching the blue dash. According to the service records we believe the 40,000 miles on the odometer to be the original miles. Receipts span from 1954-2007.

It is currently not running and driving and hasn't been started since 1996. Very original and complete with full service history from date of purchase, date coded 16” rims, and the original keys! All decks and doors are numbers matching with original floors which are in excellent condition. European Collectibles has been buying and selling 356's for over 30 years and has never had such an original example with extensive history like this.

From the earliest, 1,100 cc Gmünd beginnings, the overall shape of the 356 remained set. In 1951, 1,300 and 1,500 cc engines with considerably more power were introduced. In 1953, the 1300 S or "Super" was introduced, and the 1,100-cc engine was dropped. The 1953 series benefitted from a new, fully synchronized gearbox. In late-1954 Max Hoffman the sole US importer of Porsches, convinced Porsche to build a stripped-down roadster version with minimal equipment and a cut-down windscreen.
Simple, clean, elegant, and understated: that would describe the aerodynamic little Porsche 356 coupe of the early to mid-1950s. While still utilizing some parts and design concepts originally created for the humble Volkswagen Beetle, by 1953 the 356 was showing clear signs of the steady development and evolution demanded by Porsche's designers and engineers. The new model was undergoing almost constant improvement as the factory strove to simplify the manufacturing process for these largely hand-built automobiles.