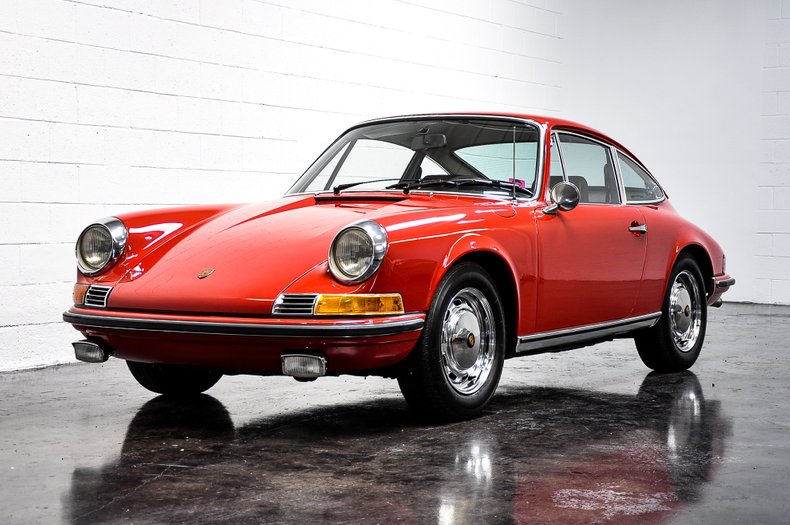 Three (3) owners originally purchased new from Volkswagen Pacific in Hawthorne, California. The original owner was from Malibu, California and used it for his golf vehicle to and from the course. He sold it to his friend's son who was a Golf Pro in exchange for cash and some golf lessons. The Golf Pro shipped the 912 to Georgia in 1985 when he got married. A few months after, the oil cooler sprung a leak and the engine was pulled out to be repaired but it never got repaired. In 2015 this 912 was discovered in the heated garage where it had been stored for the past 30 years! It was in perfect condition with no rust and mostly original paint. Upon close inspection by the third owner, it was determined the paint was not worthy to save and the 912 received an exterior (windows out) high-quality re-spray in its original color (Polo Red). The interior was all original but the front seats were upholstered in the original material with Pepita (hound tooth) inserts. The rest of the interior is “ALL” original including a perfect dash. Original dated stamped wheels (12/68) in superb condition. Complete with owner's manual, tool kit, and jack.

Mechanically everything has been rebuilt including brakes, suspension, transmission, and the engine. The matching engine was rebuilt by a Greg Crandall who works with Tim Berardelli on the East Coast. 1720cc Piston & Cylinders with all of the best components were used. The 902/16 was made only for the1969 912 and it shifts perfectly. One of the best dogleg 5-speed transmission made for the 912s. If you have been looking for a well restored, dry & rust free example that runs excellent, look no further!

1969 was the last year of the early 912s with the updated interior, featuring black and white gauges, one-piece dash, and new interior door panels integrated with new door pockets and armrests. This gave the 912 the same interior that the 911 enjoyed.