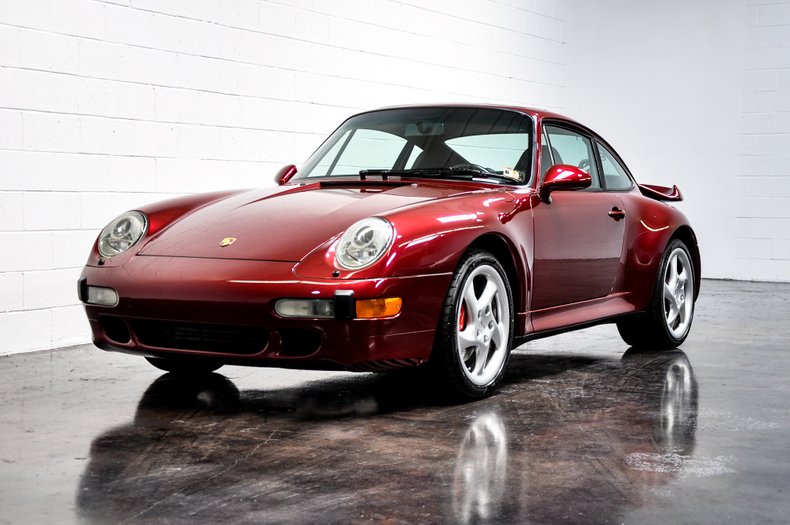 The 993 Turbo Coupe was released in 1995 worldwide with the exception of the United States. It featured a new turbocharged engine displacing 3.6 liters producing 402 horse power. Twin turbochargers and air-to-air intercoolers, electronic engine management, redesigned cylinder heads and other modified engine internals were used. The 993 Turbo was the first Porsche Turbo with all wheel drive. The electronic engine management helped the Turbo to achieve fuel efficiency far superior to any of the previous production Turbos. In connection with two catalytic converters and an on-board-diagnostics-system including four oxygen-sensors, it also made the 993 Turbo the cleanest sports car at its time. The Turbo's bodywork differs from the Carrera body by widened rear wheel arches (approximately 6 cm), redesigned front and rear bumper moldings, and a fixed rear wing housing the intercoolers. New 18-inch (460 mm) alloy wheels with weight-reducing hollow spokes were standard.

This was one of the first production cars in the world to have OBDII diagnostics (the 3.8 liter and track versions didn't have it, and the normally aspirated 993s didn't get it until 1996). All turbos since have had water-cooled heads. The car also had brakes that were larger than those on the base Carrera model.

The production run for the United States was from 1996 through 1997.

Two (2) owners, first owner had the 993 for 17 years. A full service was preformed at 32,628 miles in August of 2013, engine out, 30k service, rebuilt cylinder heads, rebuilt turbos, and new hydrologic clutch was installed $10,718 was spent. The second owner purchased this Turbo full serviced in August 21, 2013. European Collectibles has done a recent service and install four new tires. This 993TT is in excellent condition. Finished in Arena Red with a Black leather interior. 6-speed manual transmission with perfect 18” Turbo twist wheels. Complete with tools, jack, air compressor, books, service records and Certificate of Authenticity. Last of the air-cooled 911 Turbo built, a true collectors 911!