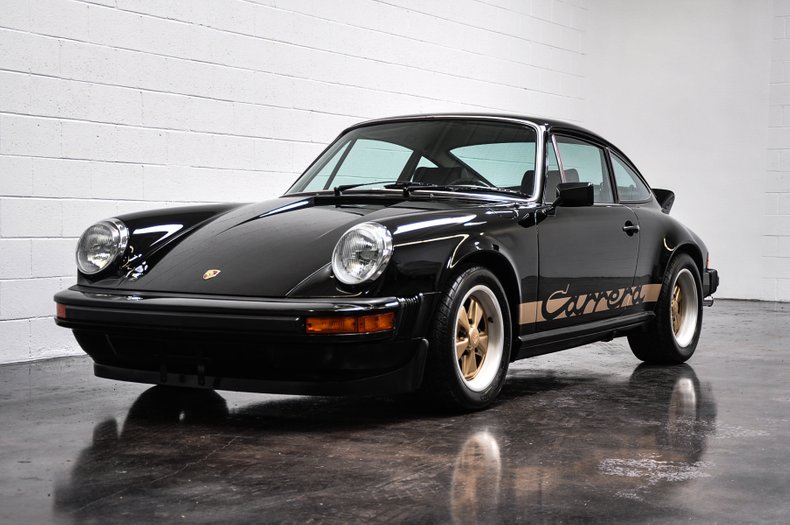 These models are sometimes considered by enthusiasts to be the most "classic" 911's. The Carrera name was reintroduced from the 356 Carrera, which had itself been named after Porsche's class victories in the Carrera Panamericana races in Mexico in the 1950s.

For the 1974 model year, the Carrera 2.7 was available with the "ducktail "rear spoiler first introduced with the 1973 Carrera RS. In the North American markets, the ducktail was standard equipment for the Carrera. All other markets the ducktail was optional, except or the home German market where the ducktail had been outlawed by the TÜV road homologation department. This led to the introduction of the whale tail rear spoiler, available as an option on the 1974-75 Carrera 2.7 models, as well as the newly introduced Porsche 930 Turbo.

#293 of 528 Carrera Coupes built for the US market. Beautiful overall condition finished in classic Black/Black, original floor pans, and front suspension pan. Andial - Road, and Racing rebuilt the engine and has done maintenance. The transmission shifts perfectly. Excellent mechanical condition with a smooth shifting 915 manual 5-speed transmission, 4-wheel disc brakes and a strong 2.7-liter engine (producing 175 horsepower plus) and 167 foot-pounds torque @ 4,000 rpm). The US Carreras are a very desirable 911 collectible and becoming a very rare find!