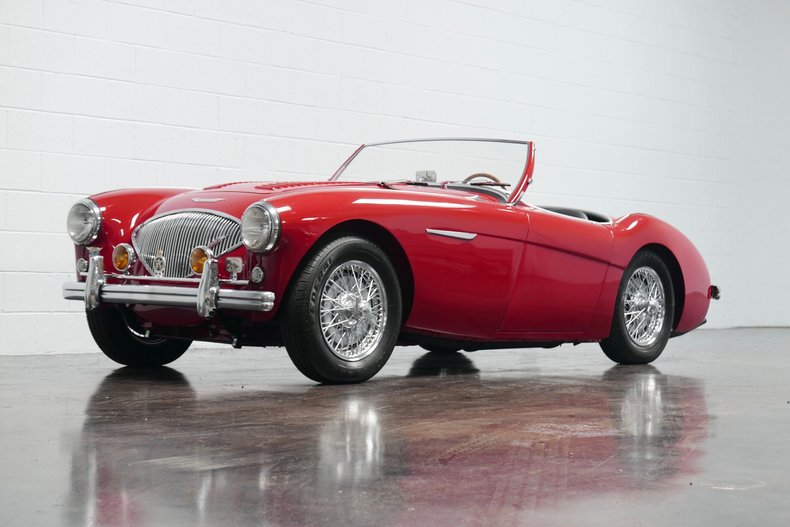 This beautifully restored Austin-Healey 100 is a Left Hand Drive model built for the North American Market. This BN2, chassis 228083 was completed on August 23, 1955, fitted with engine number 228083, body number 10138 and finished in Carmine Red with a black interior and black top. Further options included a laminated windscreen, heater, and speedometer in MPH.

The BN2 version of Austin-Healey's 100 had improvements over the BN1 that included four-speed manual gearbox with electric overdrive and larger brake drums. Optional performance items became available in 1955 and the factory introduced a 100 M model.
The M had an additional 20 horsepower via 8:1 compression ratio, bigger SU carburetors, improved manifolds and high-lift camshafts. Additionally the front springs were stiffer and an anti-roll bar was added. The louvered hood was given leather straps that completed the already racy look provided by the fold down windscreen. Only 640 factory-built Ms were produced, but many owners opted to purchase the performance add-ons via their local dealer, such as is the case here.

This car was sold new to a resident of Minnesota who kept the car for three decades before selling it to Thomas Bunch in 1987. After just 25 years of ownership (2012), Mr. Bunch sold this Healey to master restorers, BMC Classics in New Smyrna Beach, Florida. The specialists at BMC undertook a full nut and bolt restoration that was completed in 2014. Since completion, BMC sold the car to one private owner and it has accrued less than 500 miles since restoration. It has been serviced and exercised regularly and is in very good running and driving condition. It is a matching numbers example finished in its original colors and complete with a reproduction tool-kit, hammer, owner's manual, knock off hammer and tonneau.