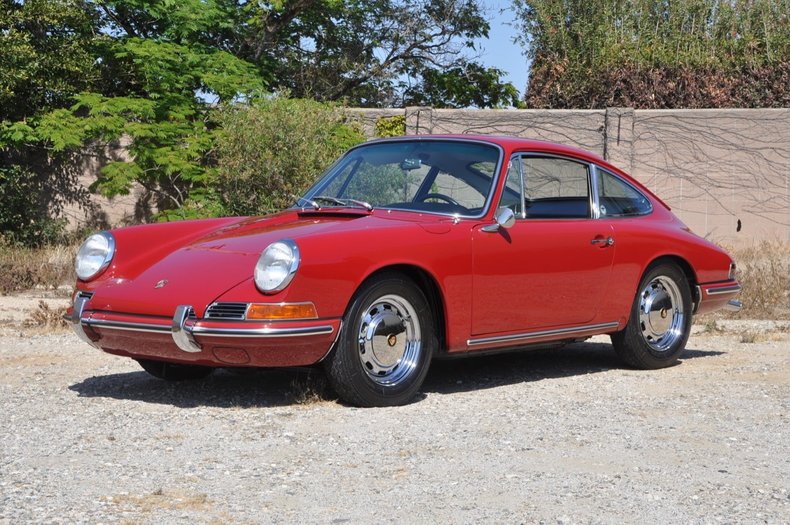 Put most simply, a 912 is essentially a 911-style body mated with a 356-derived 4-cylinder engine. The 356 was Porsche's first mass-marketed sports car. The Porsche 911 is the most successful sports car of all time.

In order to power what was originally intended to be a bigger, heavier 4-seater car, the 911 came equipped with a bigger, more powerful motor. Whereas the 356 had an air-cooled 4-cylinder pushrod engine, the 911 came with a an air-cooled 6-cylinder cam-driven engine. Since the early 1950s, Porsche had produced a 4-cam version of its 4-cylinder motor that enjoyed great success in Porsche's race cars, and which, for a very substantial premium, could also be had in the special 356 'Carrera'. Initially, Porsche did not intend the 911 as a direct replacement for the 356, but rather as an attempt to expand the high-end niche market previously held by the 356 Carrera. Alas, when the public first saw the 911 in 1963, it instantly rendered the design of 356 dated and obsolete. To contend with the fact that their new elite 911 threatened to eclipse their mainstay 356, Porsche realized they had best somehow find a way to adapt the new 911 design into a successor for the 356. To accomplish this, Porsche experimented with putting the 4-cylinder pushrod motor of a 356 into the body of a 911, and after a few short months of testing, it was readily determined that this combination was a perfectly acceptable Porsche. Thus was born the Porsche 912.

Specifically, the new 912 came equipped with 90HP motor was a slightly detuned version of the 95HP motor that had powered its predecessor, the 356SC. However, despite this reduction of power, and despite the 912 being a heavier car, it was actually faster than the 356SC thanks to more streamlined aerodynamics and a more advanced suspension system.

It is believed that this 912 is a three owner car. The current owner, Ken Brown bought it in 1999 and decided that the best way to get the car up to its best possible condition would be to enter it in full concours at a local car show. Well, he got quite a list from the judges and made it his quest to make the car all it could be and then some. He never restored it, he just improved it. He corrected and corrected as he went to shows and the car got better and better cosmetically.

Along the way, Ken also drove the car. So, he made sure it drove as well as it looked. He's been to about all of the 15 912 Rendezvous and his car has won the Best of Show award many times. The suspension, engine and all of the rest of mechanicals were addressed. As nice as it looks, the real treat comes in seeing the underside. Ken's obsession with perfection shows from every angle. Looking at it is just part of appreciating this lovely Porsche. Driving it is the icing on top of the cake.

There are records of everything that was done on this car during Ken's stewardship of the car. The second owner's records are there, too. This is not just a 912, it's a classic Porsche ready to conquer the roads ahead and the “Full” class at the concours d 'elegance.

1st in class Concours on the Avenue Carmel

Active in PCA Zone 7 Concours since 2000