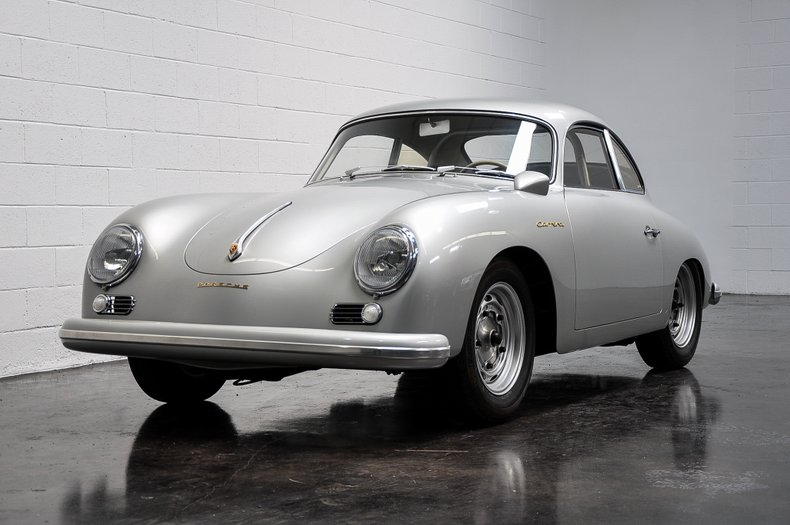 European Collectibles did a beautiful restoration on this Carrera Coupe. The driveline and body panels are all matching numbers. During the restoration, this 356 was completely disassembled so that every aspect could be properly addressed. The body was stripped to the steel and it had minimal rust. All body panels were pre-fit along with the bumpers to ensure the absolute best result before concour paint preparation. All the chrome has been triple plated by Christenson's Plating in Vernon, California. The gauges were restored by North Hollywood Speedometer. A new wiring harness was installed. All the components are OEM or NOS. Sub-assemblies on the parts was completed by Victor Miles, who is known for his concours refinishing.

The complete driveline has been rebuilt. The 4-cam engine was one of the last rebuild by Bill Doyle, who rebuilt the crankshaft. NOS pistons, liners, valves, cams, and drag leavers on a numbers matching gear set. 516 split-case transmission was completely disassembled and rebuilt with all new bearings and synchromesh. All the suspension has been rebuilt along with the braking system.

According to the Certificate of Authenticity & Kardex, the 356 was originally delivered in Sahara Beige with a Red leatherette interior. Currently finished in period correct Glasirit Silver Metallic with a Black interior. Absolutely superb in every way, this Carrera Coupe is ready for immediate road or concours use. Complete with tools, books, Kardex, Certificate of Authenticity from Porsche & photo documentation of the restoration. Truly one of the best 1956 Carrera Coupes that you will find with no issues. Driven over 100 miles and fully tested by Bill Doyle before his passing. No stone was left unturned.

Stored in a helicopter hanger in Camarillo, California for over 28 years by a longtime pilot. Purchased by the current owner 7 years ago who commissioned European Collectibles to complete a bare metal, no expense spared restoration.

By 1956, Porsche had manufactured 10,000 cars and its racing credentials had been firmly established with the help of strong finishes in the Carrera Panamericana. To celebrate the Spyder's class victories in 1952, 1953, and 1954 (the last bringing in a 1st and 2nd in class and a 3rd and 4th overall, behind the much more powerful 4.5- and 4.9-litre Ferraris), Porsche decided to install a slightly de-tuned version of the 550's complicated 1.5-litre, four-cam, twin-plug racing engine into a limited number of production cars. The new high-performance 356 A was introduced at the 1955 Frankfurt Motor Show as a 1956 model. The new model would, of course, be named the Carrera—a name that has resonated to the present day as representing Porsche's fastest street machines.

The new 100-horsepower Fuhrmann-designed, dry-sump, roller-bearing engine, with chrome-plated cylinder bores and 8.1 compression—down from the Spyder's 9.5—could be ordered in all three of Porsche's 356 A models, the coupe, cabriolet, and speedster. The oil tank for the dry-sump lubrication system was mounted in the left-rear wing well, being protected from road debris by a mesh screen, which carried the car's chassis number. A pair of Autopulse fuel pumps and a pressure-reducing valve-controlled fuel flow.

There were numerous chassis improvements, including revised torsion bars, larger shock absorbers, and revised suspension bump stops, which all helped make these potent little cars much more enjoyable to drive. Wheel diameter was reduced to 15 inches from the 16-inch size of the Pre-As, and wheel width was increased by a full inch to 4.25. Tire size was increased to compensate for the additional 47 kilograms of weight. Externally, there were few other clues beyond the gold-plated “Carrera” scripts on the front wings and tail panel that revealed that these little cars were capable of almost 120 mph and could easily cruise at “the Ton” for hours on end.