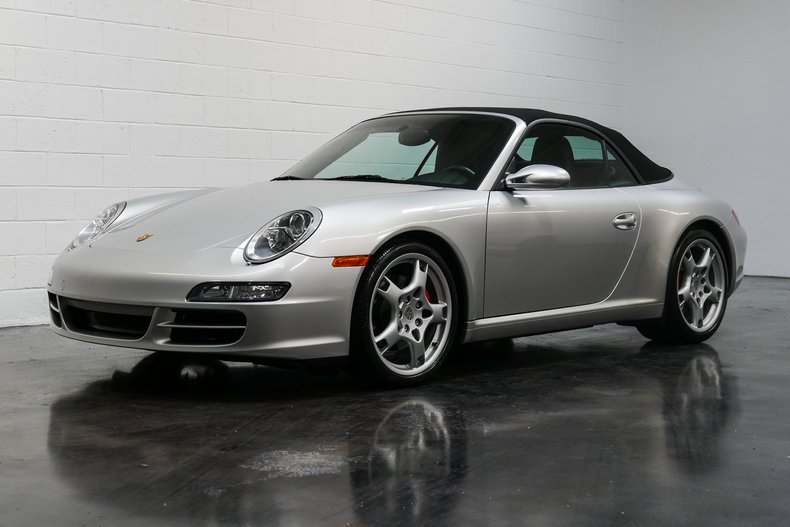 Two owners with only 7,566 miles, well maintained and cared. Finish in classic Arctic Silver with a Black interior. The 997 models are the next generation to come back to where Porsche started from.

Cabriolets for the first time, development of the cabriolet version of the 997 led the design and engineering effort at Porsche with the coupé following. Porsche applied the logic that if you started with the more difficult cabriolet challenges (for chassis stiffness) the coupé version would simply be more rigid. Despite the additional weight, the cabriolet versions attain nearly the same performance figures as their coupé counterparts. Even the rear tail comes up slightly higher on the cabriolets to compensate for differences in drag over the canvas top vs. the smoother coupé shape. The 997 Cabriolet had factory optional hardtops that provided extended protection from unexpected weather conditions than the conventional canvas top. It is interchangeable with that available on the late 996 Cabriolet models. The hardtop provides a winter option to cabriolet owners.

Porsche 997 is the internal designation for the Porsche 911 sports car manufactured and sold by German manufacturer Porsche between 2004 (as Model Year 2005) and 2012. Production of the Carrera and Carrera S coupés began in early 2004, all-wheel-drive Carrera 4 and Carrera 4S began to be delivered to customers in November 2005, the Turbo and GT3 derivatives went on sale in late 2006 and the GT2 in 2007. In addition to the coupé and cabriolet versions, Targa versions of the Carrera 4 and Carrera 4S were also available, which carry on with the "glass canopy" roof design used since its first application on the 993 until the 991, which reverted to the classic Targa top layout used on the early 911 Targas.

The 997 was an evolution of the preceding 996, with the most significant changes being interior and exterior styling, the most notable being the replacement of the "fried egg" headlamps used on the 996 with the classic "bug eye" units. Larger 18-inch wheels were fitted as standard, and other engineering changes include slightly increased power; however, the car is technically very similar to its predecessor. A new S version was offered, with additional power from a slightly larger engine, sports suspension, and sports exhaust.

The 997 is the most commercially successful 911 of all time, having sold 100,000 units in the first phase alone between its introduction in 2005 and July 2007. It has also received mostly positive reviews from the worldwide motoring press; even British motoring journalist Jeremy Clarkson, a known detractor of Porsche cars, noted that the 997 will "make love to your fingertips and stir your soul."