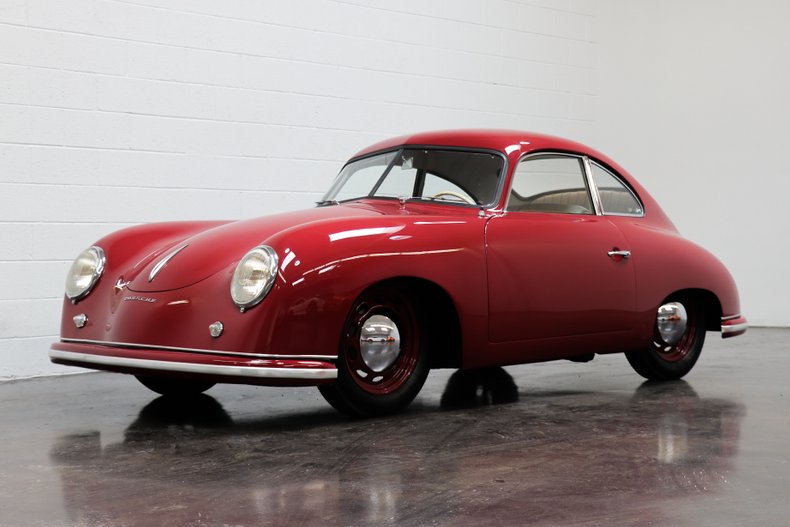 Very early Pre-A European Coupe, featuring the split windscreen and body-to-bumper styling. It was delivered new to the Schmidt & Koch dealership in Bremen, Germany, in 1951. The original factory Kardex confirms it was finished in maroon with a grey interior. It later was sold to Tom Birch in the early 1970s, a leading light in the 356 split-window registry and a key figure in helping preserve the early cars. He used it as his daily driver until the 1980s when it passed to Jim Jenks, founder of the famous Ocean Pacific surf clothing and apparel company.

The next owner, Dieter Vongehr, had founded a specialist Porsche garage in San Diego and was a high-profile member of the Porsche Club of America. He carried out a sympathetic restoration and upgraded the engine to a correct-type, but slightly later 1500 Super engine from 1953. The car is also fitted with the correct 'crashbox' transaxle. It then passed to the Ingram Collection in Durham, North Carolina, which contains perhaps the finest examples of Porsche cars.

The current owner sent the car to Emory Motorsports which has restored Porsche Werks cars, including the 1951 Le Mans winner. The firm was tasked with returning the car to its original period specification down to the last detail. Their meticulous work included commissioning Autobahn Interiors to recreate the seats and door cards based on original Reutter factory records. It features the correct grey vinyl and cloth seats with close-woven carpets. Dominating the dashboard is the correct period six-volt Telefunken ID51 tube radio with AM and SW, programmable by perfect ivory pre-selective pushbuttons. It also features the early steering wheel, which is unadorned by the Porsche emblem that featured on the later cars. Affixed to the spare wheel is also a rare and complete Hazet toolset. Cherished by a series of marque connoisseurs, this 356 is perfect for historic touring events and ideal for a collector seeking a very early example of the Stuttgart split-window cars.

The next chapter in Porsche history began on 6 April 1950 when the first Porsche Coupe 356 left the assembly line in Stuttgart. The new steel body was made by Karosseriewerk Reutter, which had been making limousine bodies since the 1930s and had a reputation for excellent quality. The coachbuilder was a natural choice for Porsche and was to become the main supplier of Porsche bodies for the next two decades.

Those early cars are denoted by the windshield, which featured a peak in the roof's leading edge and a split front window. They also have the purest design thanks to the slim body-colored bumpers fitted tightly to the body to accentuate style and aide the slippery aerodynamics that were crucial to overcoming the limited horsepower. The result is a timeless design.