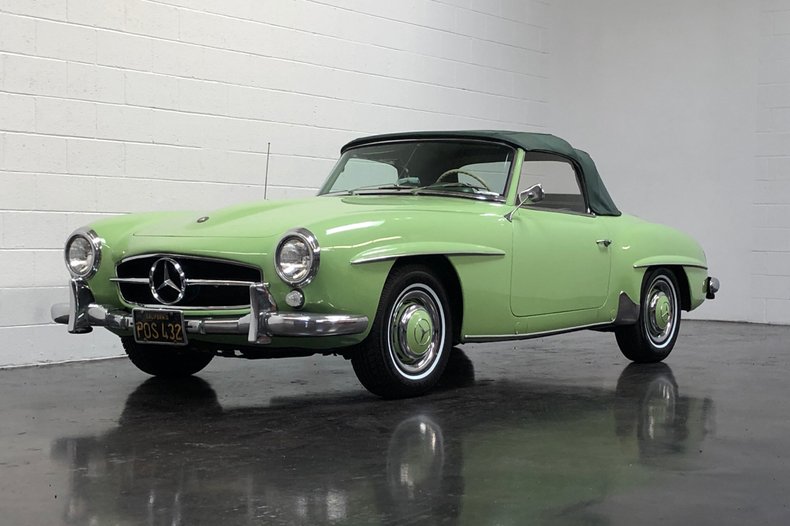 European Collectibles is proud to have found this 190SL as it has quite an interesting history and is very original with excellent documentation. This car, chassis "8502568", was completed in December 1958 as a 1959 model and was finished with Light Green paintwork and trimmed with green leather. Additional specifications of the build include a Becker Europa radio with Hirschman Antenna, rear view mirror (left), windshield washer system, bumper guards (front), transverse seat for a third passenger, special shields underneath for protection on rough roads, export headlights, operating manual in Spanish, four white wall tires plus a spare wheel in the trunk.

The car was ordered by the one and only owner it has ever had. Although she was an American citizen, she took delivery in Caracas, Venezuela, where she was living with her husband. Within the first few years of ownership, she, the husband and the car, returned to the USA and settled down in Newport Beach, CA where this car remains today.

During her ownership which spanned nearly sixty years (1959 - 2018) she took excellent car of the car and had services and restoration work performed as needed. In its lifetime, it has had one high quality repaint in its original color, Light Green, some minor interior repairs and mechanical servicing that included a top end engine rebuild. Due to being garaged and only having been driven 89,000 miles in its lifetime, it doesn't have the ills we typically find with these cars, such as rust in the rocker panels and various modifications to the carburetors and cooling system.

For the past ten years, this 190SL has been sitting while the owner wasn't able to drive so after being purchased by European Collectibles, we completely rebuilt the brake system including master cylinder and brake booster, replaced all brake hoses, purchased new shoes and had them arced to freshly turned drums. The cooling system was tended to similarly, the original carburetors were tuned, the fuel tank was removed, cleaned, coated and reinstalled. The engine has very good compression numbers and has recently had about fifty miles of trouble free testing and sorting. We are happy to report that is running and driving very well.