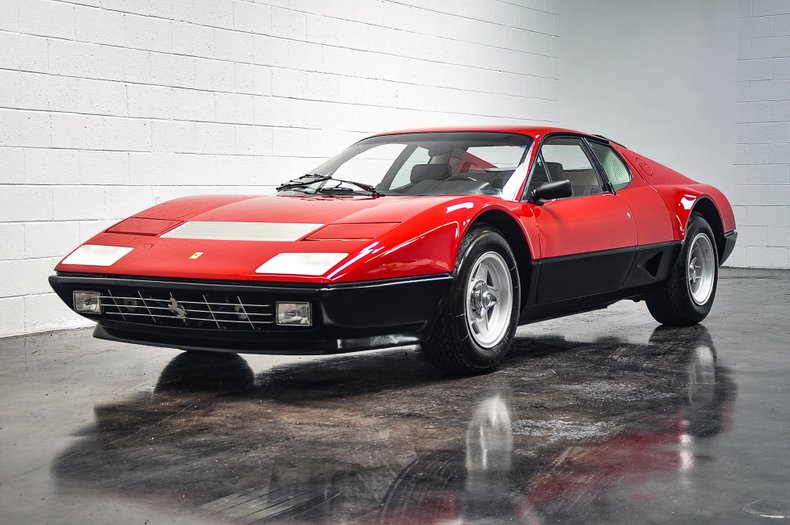 Originally delivered new in Italy. Imported to the United States in the early 1980s. This is an early carbureted version of the 512 Berlinetta Boxer, very well preserved survivor, with one repaint Red (Rosso Corsa), original Black leather interior, Daytona seats, and a new leather dash. 5.0 liter flat 12 cylinder engine with 5-Speed manual transmission. The transmission was rebuilt in 1998 at 45,474 km. Restored in 1995 with receipts totally over $58,000 for the driveline rebuild at 37,311 km. A complete repaint was done in 1995 with photo documentation of the body taken down to steel. In 2014 the timing belts were replaced and a full service was performed $20,000 was spent. The current kilometers are 47,216 km (29,338 miles).

Ferrari's revolutionary replacement for the legendary 365GTB/4 Daytona was this flat-twelve coupe using the same engine design developed for their Formula One cars. This horizontally opposed twin-cam engine was a powerhouse in its day, fed by four triple-throat Weber carburetors and its mid-ship placement gave the car phenomenal balance and handling. Boxers have always been desirable Ferrari collectibles and have been trading in the mid-six-figures for years, but recent caution in the market has brought them significantly lower and created an attractive opportunity.