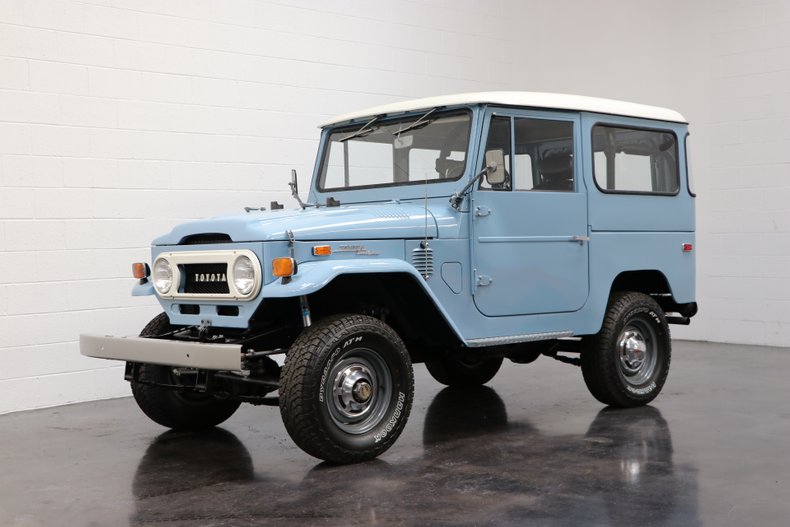 Full ground up restoration was done from 2015-2017 totaling over $45,000. No expense was spared, the vehicle was completed disassembled and the chassis was media blasted to ensure the best possible result. The paint is in beautiful condition finished in Horizon Blue with a Black interior. Very straight, solid & rust free with excellent panel fit and fully detailed undercarriage. 3.9-liter in-line six cylinder engine, 3-speed manual transmission, and 4x4 wheel drive. These FJ have a huge following! If you are an off-roading enthusiast or just looking for a fun FJ for the weekend look no further, this vehicle will make a great addition to your collection.

The FJ40 model made legends out of the FJ and the F engine. Its first production year was 1960, and it debuted with a short wheelbase version. The FJ40 was produced until 1984. The FJ40 came with either a soft top or a hard top. Though relatively sparse on creature comforts, the FJ40 nonetheless captured the attention of buyers across the world due to its reliability, sturdiness, and off-roading ability.

Used from 1955-1974, the Type F engine made the FJ famous: not the most efficient but virtually impossible to break! It was (and is) commonly known to run 500,000–600,000 miles without a problem. It was constructed as a 3.9 liter naturally aspirated, in-line six-cylinder engine. The F series of engines were deliberately engineered to be similar to GMC L6 OHV 235 engines but improved upon its inspiration to suit the FJ's needs.