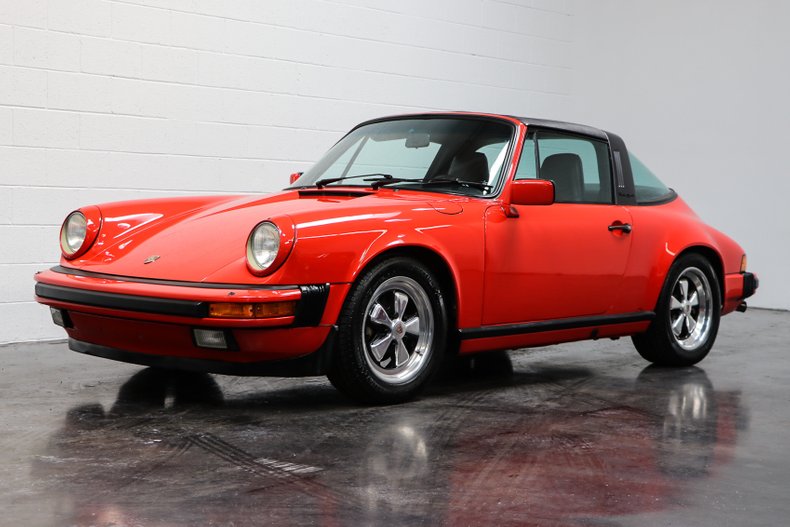 Four (4) owners, California car with only 48,040 original miles. Finished in Guards Red with Black upholstery. An amazing original example. Straight body with excellent gaps and no rust. The overall quality of the paint is exceptional and is mostly original, along with a perfect original interior.

Mechanically the Carrera performs, as it should with a 3.2L flat-six engine producing 207 horsepower @ 5,900 rpm, smooth shifting 5-speed manual 915 transmission and four-wheel disc brakes. The current owner was meticulous and had the car thoroughly inspected so he could drive the Carrera anywhere. In 2012, Lee Rice (Porsche Independent) completely went through this 911 Carrera at a cost of over $1,600. A few years later in 2014 Aase Motors replaced all the synchromesh, 1st & 2nd gear teeth and installed a new clutch disc totaling $3,992.31.

This is one of those 911s that you want to buy from a meticulous owner who took excellent care of his classic 911. Complete with original tool kit, owner's manual, and paperwork. Rare opportunity to own an early 3.2L Carrera.

The 3.2-liter 1984 Porsche 911 Carrera debuted in late 1983 after the very successful run of 911SC models, built from 1978 to 1983. The Carrera—priced at $32,000—shared most of its visual cues with its immediate predecessor, but benefitted from added power and performance, as well as other evolutionary updates.

The cars came as they had when the 911SC bowed out—in a Coupe, open Cabriolet, and the in-between Targa body styles. The chief upgrade in the Carrera was the larger 3.2-liter flat six engine, which looked much like that of the 3.0 it replaced but was built chiefly of all-new parts. One crucial change was an improved timing chain tensioner, which had been an issue on previous models. Also new was Bosch Motronic fuel injection, which replaced the K-Jetronic system of yore. The engine produced 200 horsepower and came with a 915 manual five-speed transmission. This was enough to propel the Carrera from 0 to 60 mph in about 5.5 seconds.