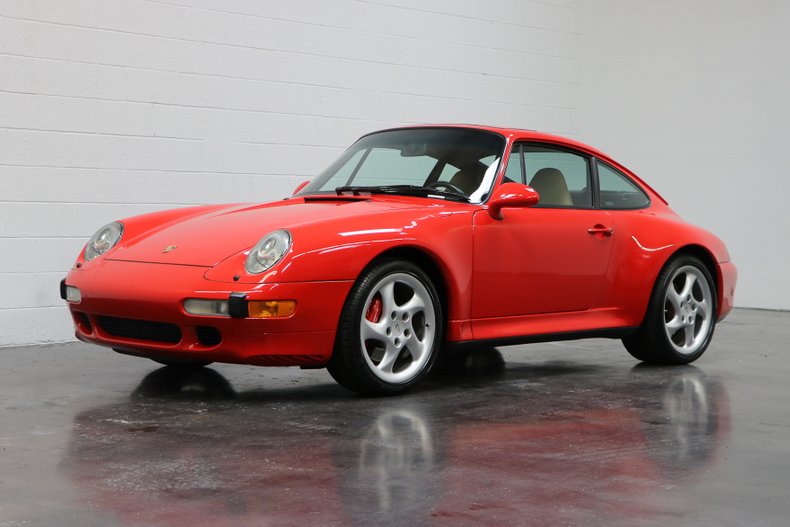 Immaculate 1998 C4S with only 33K miles. Two (2) owners, California car with the current owner having it since 2002 in Southern California. Meticulously maintained with all service performed by the local Porsche dealership (Newport Auto Center) in Newport Beach, California. Complete service records since new. All books, tools, compressor and original jack. 1998 was the last year of the air-cooled engines, and very few C4S were produced that year. The 993 Carrera 4S (C4S) shares all the features of the 933 Turbo, except for the Turbo engine. It has the Turbo body style, Turbo brakes, Turbo suspension and has all wheel drive. Because of it's uniqueness and rarity it is a great investment car with upside appreciation potential.

Finished in Guards Red with a Cashmere/Black interior. The paintwork is flawless with an immaculate interior. Factory ordered with special options which included; racing style sport seats, aluminum faced gauges, carbon/aluminum shift knob and parking brake handle and equipped with litronic headlights. The car is as it was ordered from the factory including the original "Porsche" radio. A brand new set of Pirelli P Zero Rosso tires have just been installed and she is ready for the next owner. Do not miss this opportunity!

History
The Porsche 993 is the internal designation for the Porsche 911 model manufactured and sold between January 1994 and early 1998 (model years 1995–1998 in the United States), replacing the 964. Its discontinuation marked the end of air-cooled Porsches, with the 993 being the last air-cooled 911.