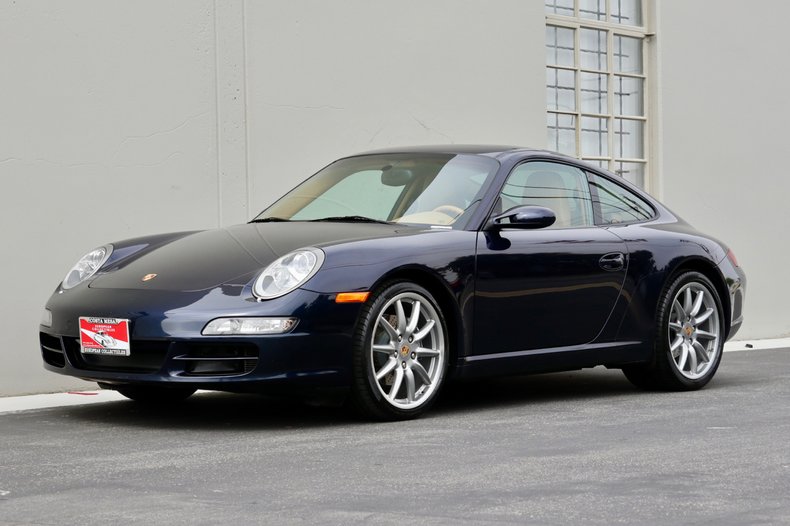 The original selling dealer, Porsche of Huntington Station (NY), sold the car on March 25, 2008. Regular services were completed at the dealership from 2008 - 2011 and then sold to a resident of California. Clearly, this was just a summer car while in New York, because it took the first owner over three years to accrue 18,000 miles. The second owner, a resident of Los Angeles, added another 10,000 miles during his four-year ownership. The third and most recent owner purchased the car in 2015 and added 20,000 miles in her four-year ownership bringing it to its present odometer reading of 48,000.

The Carfax is clean and matches our opinion that the car is accident-free. The paintwork on the body has been measured with a paint meter and we believe it is all original. The front bumper may have been resprayed at some point, but we are not positive. The Midnight Blue Metallic paintwork is good but has the usual amount of rock chips. The left rear fender lip was scraped and dented at one point and still shows a small ripple and scratch. The rear bumperette has a scrape too and both flaws are pictured. The interior leather is in good shape with consistent wear for the age and miles and has never been re-dyed or repaired. The 19" Carrera Sport wheels have some curb rash and are wearing new Pirelli tires and an alignment was done recently. We have excellent records on hand from the most recent owner and we just had quite a bit of service work done by a local specialist. A summary is available on request but highlights include a 40,000-mile service and a refresh of the air-conditioning system. This is a great running and driving Porsche that is current on all services and ready to go to the next owner.