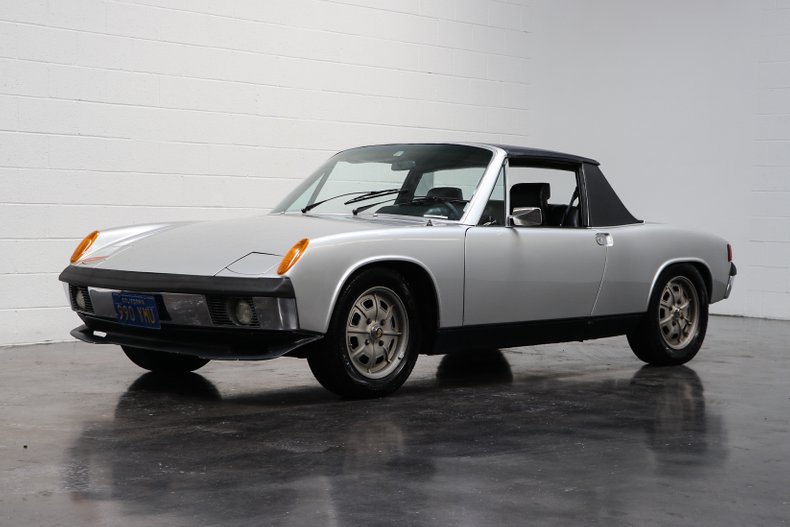 On February 16th, 1971, the first owner, Mr. Hytrek, purchased this vehicle new from Porsche/ Audi in Fairfax, Virginia. Since Mr. Hytrek was a Colonel in the United States Marine Corps, he had to travel often due to work. This meant that wherever Mr. Hytrek went so did his 914. As a result, this 914 has lived in Virginia, Washington D.C., Kansas, and eventually in 1975, Mr. Hytrek, relocated his residence and the vehicle to San Diego, CA. Mr. Hytrek had the vehicle religiously serviced by Pioneer Centre's Porsche Repair in San Diego, California. The second and current owner took possession of the vehicle in early May 2018. On July 13th, 2018, the current owner had, 911 Design, from Montclair, California, perform the following: safety inspection, major service, re-pack wheel bearings, install a new clutch cable, replace 1st gear synchro, install seat belts, replace fuel level sending unit, and replace headliner totaling $8,351.04.

Finished in Silver Metallic with Black upholstery. A rust-free example that has lived in California for the majority of its life. Excellent mechanical condition with its 1.7L engine, producing 85hp, paired to a responsive 5-speed manual transmission. Complete with original window sticker, original invoice when sold new, complete ownership history from 1971-2018, dog bone footrest and spare tire. An extremely rare opportunity to acquire a 914 as fully documented as this.

History
By the late 1960s, both Volkswagen and Porsche were in need of new models; Porsche was looking for a replacement for their entry-level 912, and Volkswagen wanted a new range-topping sports coupe to replace the Karmann Ghia. At the time, the majority of Volkswagen's developmental work was handled by Porsche, part of a setup that dated back to Porsche's founding; Volkswagen needed to contract out one last project to Porsche to fulfill the contract and decided to make this that project. Ferdinand Piëch, who was in charge of research and development at Porsche, was put in charge of the 914 projects. Porsche 914 replaced the top of VW's line, the Type 34 Karmann Ghia.