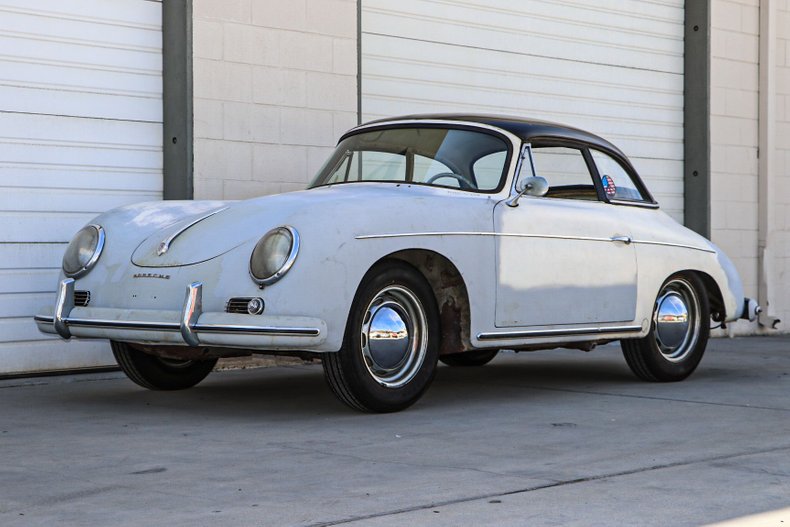 Stored in California for the past 38 years, California Black Plates, very original straight body with very good gaps and panel fit. Original floor pans and battery box with minimal rust. All matching numbers including the front trunk, rear deck lid, and doors. Matching 1600cc Normal engine and 644 manual 4-speed transmission. Very complete with all glass, gauges, knobs, brakes, bumpers, front seats, rear seats, steering wheel, hardtop with fixed rear quarter windows with complete trim (rare to find with all the trim), convertible soft top and both rear cover panels for the hardtop & soft top. The engine does turn over but is not in running and driving condition.

Per the factory Kardex this 356A Cabriolet was delivered by Otto Glöckler in Frankfurt, Germany. Delivered on December 23rd, 1957 to the first owner, Lieutenant Scott G. Budge, stationed in Hanau, Germany located approximately 25km from Frankfurt. Originally finished in Light Ivory (color code 5704) with Red leatherette interior. Factory options include Becker Europa radio (currently has an AM SAPPHIRE radio), antenna, and chrome wheels. Other options include side body molding and deluxe horn ring. Rare opportunity to acquire a matching number 356A T2 Cabriolet restoration project.

A number of engines were added to the model line at the start of 356A production, including the venerable 100-hp 1500cc four-cam Carrera motor. The largest pushrod four now available was 1600cc, while the 1100cc engines were dropped. For 1956, the 1500cc line of pushrod fours was also removed. Single-throat carburetors were replaced by Zenith twin-throat carbs in 1957. And by 1958, all pushrod motors were 1600cc. For 1959, all were 1600cc. The suspension changes introduced on the 356A resulted in the most significant improvement to the 356's handling during the entire 356 production run. In addition to the front anti-roll bar introduced near the end of pre-A production, oversteer was further tamed by adding softer front springs, stiffening the anti-roll bar, and doubling the caster angle. Understeer was engineered into the chassis with updates to the steering linkage and softer rear suspension. Longer, more vertical rear shocks were also added. The wheels were widened to 4.5 inches and the diameter decreased to 15 inches. The windshield was now curved instead of bent. The dashboard was flat. Body styles included coupes and cabriolets and two types of roadsters, the iconic Speedster and its successor in 1959, the one-year-only Convertible D.