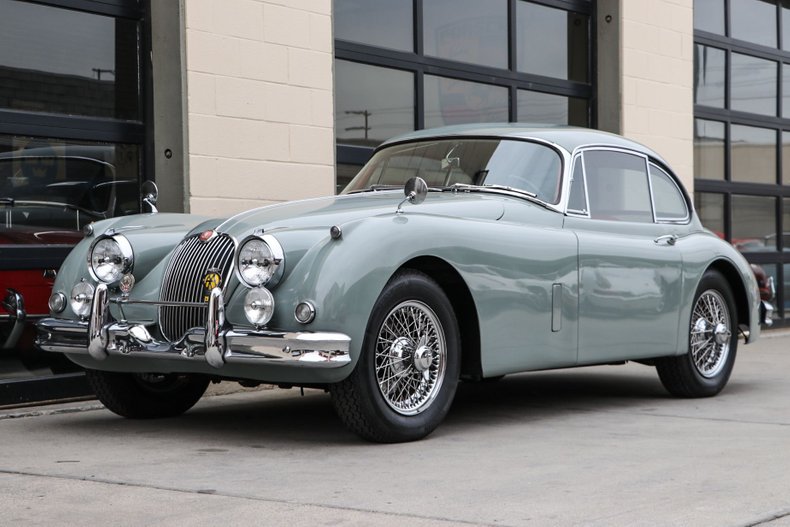 Two (2) owners, California Yellow plates, built-in Coventry on January 27, 1959. Exported from the United Kingdom to Jaguar Cars, New York, New York. The original owner took delivery from the Jaguar dealership San Marino, California, on February 19, 1959. The second owner purchased the XK150 in 1979 and has had it for the past 40 years.

After 26 years of originality, the second owner decided it was time to freshen up the exterior of the XK150. The restoration commenced in 1985, the body was stripped to bare metal, with minimal bodywork required and re-sprayed in its original Mist Gray factory color. All the chrome work was re-plated. Original chrome spoke wheels were replaced with new knock-off 16” x 5” chrome wheels with stainless steel 60 spokes. And all the mechanical work was addressed.

In 2005, the owner purchased a fully rebuild XK 150 3.4-liter engine from VSE Jaguar in the United Kingdom, a very well know Jaguar XK & XKE engine rebuilder. The complete engine bay was detailed and the rebuilt engine was installed. In 2006, a complete new interior was installed including; dashboard, seats, Wilton Wool carpets, headliner and rear boot were trimmed in factory Red leather with vinyl piping. In 2018, the engine was removed, and a new rear seal kit was installed, along with a newly machined crank. Main and rod bearing were replaced. The clutch was replaced, and new crank plugs and engine mounts were installed. A new aluminum radiator with an electric cooling fan was installed. In July 2019, new halogen headlights, taillights, and instrument panel lights were installed, and new Vredestein Sprit Classic tires and new tubes were installed.

The final iteration in the XK series was the XK150, which was introduced in May 1957 as a 1958 model. Although recognizably a member of the Jaguar family, it was wider and not nearly as swoopy as the earlier XKs, and the distinctive grill had a much more delicate appearance than its predecessor. Although the chassis was carried over unchanged from the 140, standard equipment now included four-wheel disc brakes, which was a first for a car built in series production. Initially, a convertible and fixed head were the only body choices. Under the wider bonnet lurked the familiar twin-cam, straight-six, which was almost as pretty as the car itself. The standard engine was rated at 190 bhp, but a 210bhp SE version was also offered. More power soon followed with the S version of the 3.4-liter engine, which breathed through triple SU carburetors to generate 250bhp. As before, the four-speed manual transmission was offered with overdrive and a three-speed Borg-Warner automatic was optional.