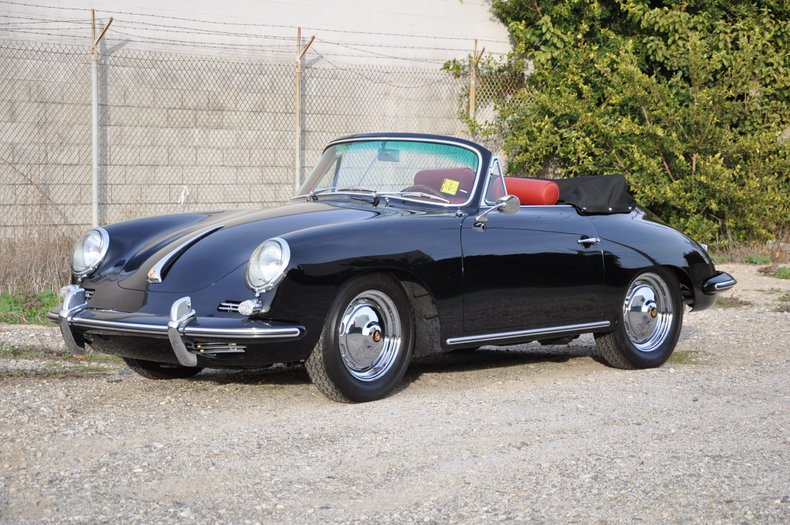 The 38th T6 356B off the line. Super-90 engine #804318 is matching per Certificate of Authenticity, the date of birth was 10/31/1961. Sold by Porsche Dealer Rittersbacher in Kaiserslautern, Germany, it was delivered as a “Cabriolet/Hardtop”; meaning it was a Cabriolet body with a removable Hardtop. The car was brought to Porsche Cars of Southwest in December of 1965. The hardtop is original to the car and the soft-top was sourced and added later.

It was sold to one of our past clients in August 2010 by a family in Las Vegas, Nevada, where it had sat for 15 or so years. Once purchased the owner undertook a complete and thorough restoration of this 356. The following is a brief list of the work done: Dave DeMaria of Award-Winning Vintage Car Works, Englewood, Colorado handled all bodywork and preparation to paint. Tom Scott, multiple concours winning painter and 356 expert handled the paint and final assembly. Victor Miles was charged with the restoration of most of the chrome and jewelry components that make a difference. The interior was done by Autos International in Solano Beach, California. The transmission was rebuilt by “Trevor” a well know Porsche mechanic in Denver, Colorado. The Engine was rebuilt using the original Super-90 case, a 912 Crankshaft, Prauter Connecting Rods, Shasta Pistons and Cylinders, NuTek Cam and Cam Followers. All sheet metal was powder coated and hardware was plated in the zinc finish. The brake drums were trued and resplined. Brake linings were matched to the drums. New brake lines were also installed. A new wring harness from YnZ was installed for the 6-volt system. Joe Leoni provided his starter relay, headlight relay, and CuLayer for the rear lights. Options include VDM Carrera wood steering wheel, deluxe horn ring, headrest, Blaupunkt AM/FM radio, hardtop with pop-out rear 1/4 windows, soft top, boot cover, tools, jack, owners manual, and battery trickle charger.

Beyond the highly detailed restoration, this 356 Cabriolet is very interesting. It is a very rare Cabriolet-Hardtop. It left the factory with the hardtop in place. It is also a factory Super 90. Fewer than 700 Super 90 Cabriolet's were built and less than 20 were delivered as this one was spec'd. The Super 90 was restored to full show level but was also set up to drive. Both the hardtop and soft top come with the car so you can change your motoring experience as the seasons change. Whether the hardtop is in place or the soft top is down, this 356 offers an incredible driving experience.

For the 1962 model year, the front hood was re-designed to feature a widened lower section and a tank cap cover was introduced into the passenger front fender. Additional twin grills were also integrated into the enlarged bonnet and the bumpers were raised 3” for US DOT requirements.

The Porsche 356B was available in a number of different versions. There was a Coupe, Cabriolet or Roadster. The available engines were a Normal with 60HP, Super with 75HP or the top of the line Super 90 with 90HP. The S-90 engine is particularly sought after by collectors due to its high power output.