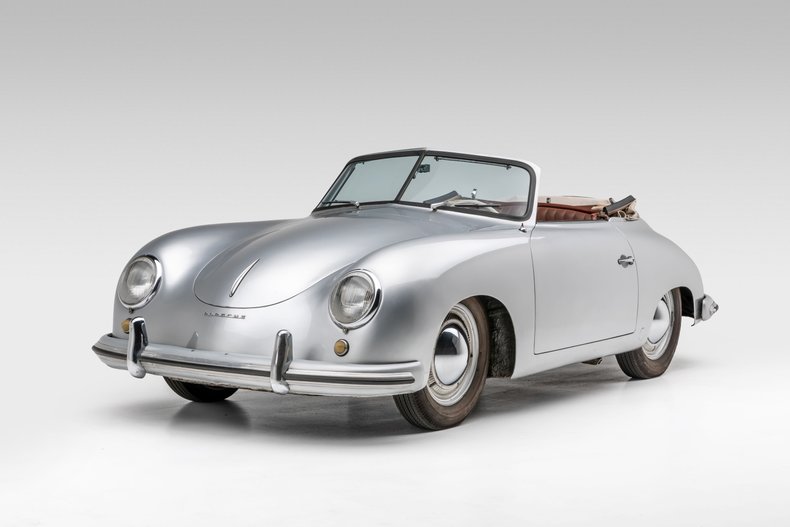 Very rare Pre-A Split Window Cabriolet, United States delivery with Interim-bumpers. Fourth from the last Split Window Cabriolet built, completed April 22, 1952, and delivered new to the US Porsche dealer - Hoffman Motors in New York, New York. According to a source, there were a total of 40 split cabs with US export interim bumpers made based on reviewing all Kardex's from that era. According to the Split Window registry, there are less than ten US Spilt Window Cabs known today. The factory Porsche Kardex & CoA confirms the 1500cc engine number as 30242 (type 527), finished in the Sand Grey (color code 527) with a Red leather interior. The Certificate of Authenticity confirms the original equipment: Telefunken Radio, Antenna, Comfort Seats, Ventilation Wheels, Cooling Rings, Reinforced Bumpers, Tachometer and Odometer.

Not much is known about the early history in the 1950s and 1960s, but it does have California Black plates and has been registered in California since the 1960s. In the mid - 1970s this 356 was advertised in the Los Angeles Times and purchased by a California Highway Patrol officer who also had a 1952 356 Coupe. In the late 1980s, the 356 was purchased by an avid Volkswagen Bus collector who worked with Tom Birch, a leader in the 356 split-window registry and a key figure in helping preserve the early cars. Birch helped with the mechanics and installation of a new wiring harness. In the late 1990s, the 356 changed hands again and ended up at Victor Miles's shop for some light restoration work.

The current owner purchased this 356 in Redwood City, California in 2008 as a keeper and loved the 356 just the way you see it today… A lot of time and money was spent having the 356 sorted including rebuilding the engine, going through the braking system, fixing everything to work properly and having the original Veigel gauges restored by North Hollywood Speedometer. Mechanically this 356 runs phenomenal with plenty of horsepower, a smooth-shifting transmission with synchromesh able to upshift up and down without any effort and the brakes stop the car as they should.

This 356 has many of its original period specifications down to the last detail. Most of the interior is original with the exception of the front seats & the soft top that was upholstered 30 plus years ago. Dominating the dashboard is the original six-volt Telefunken ID51 tube radio with AM and SW, programmable by perfect ivory pre-selective pushbuttons. It also features the early steering wheel, which is unadorned by the Porsche emblem that featured on the later cars. The undercarriage is completely original and untouched after 68 years including the floor pans and the longitudinals a very honest example. Cherished by a series of marque connoisseurs, this 356 is perfect for historic touring events and ideal for a collector seeking a very early example of the Stuttgart split-window cars.