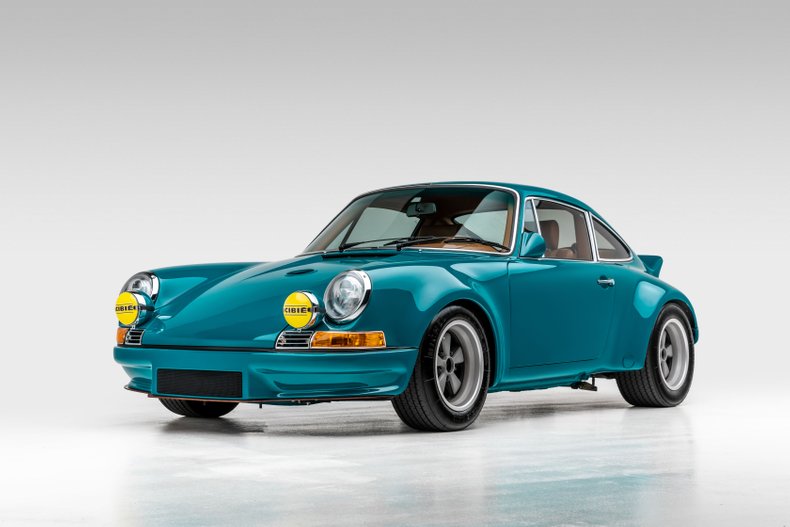 European Collectibles is pleased to present this stunning Twin Turbo RSR that was built to customer specifications by Patrick Motorsports. This project began with a U.S. model 1975 911S that was stripped to bare metal and fitted with early RSR style steel fenders front and rear. It was backdated to “long hood” specification with subtle custom features such as a roofline with shaved rain gutters similar to the RUF Yellowbird, R-style taillights, center-fill hood, 934/935 style aerodynamic mirrors, and a beautiful “Jabroc” spoiler is a special wood used for F1 cars that protects the fiberglass front valence. An iconic ducktail spoiler was handcrafted to fit over the engine's intercooler and features a massive grill for proper breathing. Once the bodywork was perfected, a one-off color was designed by a notable designer, and expertly applied to the entire body shell. Work in the interior began with the installation of a roll cage to strengthen the body shell for the extra horsepower and provide additional safety protection for the driver. The roll cage was wrapped in leather as were the hardback sport seats and nearly every square inch of the rest of the interior. Wool carpets were installed, and a unique weave was designed for the seat inserts, door panels other accent areas. All interior components were cut by hand, and the hides match perfectly. The wood shift knob is an homage to the 917, the gauges were inspired by the beauty of the 356 & early 911 and the vent control panel was restored to match perfectly.

The engine case is a 3.6L from the 964 era, and the displacement has been increased to 3.8L with twin plugs, MoTeC engine management system, and dual turbos. The engine produces in excess of 600BHP at the crankshaft. When tested on a chassis dyno, the rear wheels produced 558 bhp with one bar of boost and gasoline from the pump. The engine is capable of producing much more power, although not necessary. In addition to it making big power, it is a thing of beauty with handcrafted stainless-steel headers and an installation so sanitary and well-planned, it looks like as if it were done at the Porsche factory. To put this kind of power on the street, where it will eventually be caught in traffic, cooling became a significant concern. To solve this potential problem, multiple oil coolers and electronic fans can be found in various nooks and crannies throughout the body shell. Additionally, careful attention was paid to all engine and gearbox mounting points, and the bodyshell was reinforcement. A G50 6-speed gearbox with a shortened bell housing was updated and rebuilt with a Billet side cover and a limited-slip differential. A hydraulic pedal assembly was installed, and the actuation of the competition clutch is direct.

Opening the hood reveals the same high level of craftsmanship that is found elsewhere. The paintwork and coated surfaces are expertly presented, and the racing-style fuel cell and dual brake master cylinders mean business. Underneath the car is more of the same with large 917 type brakes, 935 type suspension, Bilstein adjustable coil-over dampers, and moonball front strut mounts.

Walking up to the car and marveling at its overall presence and attention to detail is one thing. Sitting down in the beautifully appointed yet purposeful interior is another, but the real excitement begins when you turn the key, fire the engine, and engage the clutch. This is a rare opportunity to own one of the finest custom Porsches ever built.