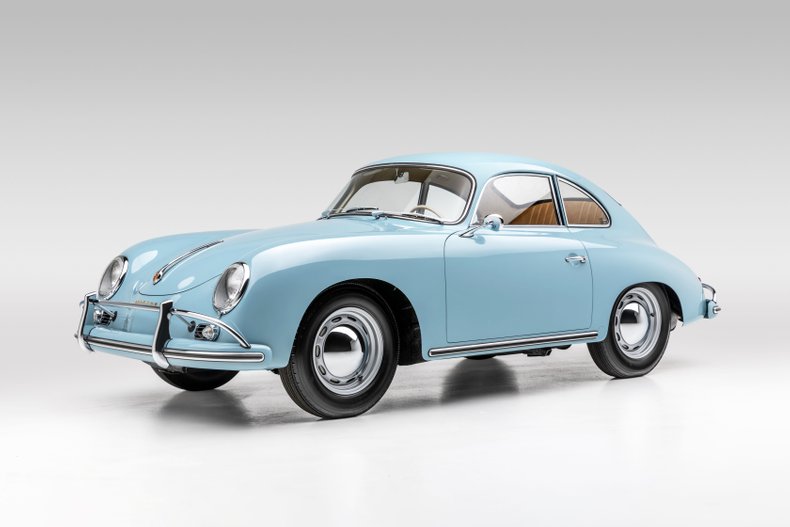 Mr. Alfred Adreoli from Arcadia, California took European delivery via Otto Glockler Porsche in Frankfurt, Germany on August 11, 1959. Finished in Meissen Blue with a Tan interior, US chrome overrider bumpers, painted rims and Continental tires. VIN 108778 is the 139th from the last 356A T2 Coupe produced. By September 1959 the 356 had been imported to California and had a 1500-mile lube and service for $7.57 at Century Motor Sales in Alhambra, California. A letter from Porsche Car Distributors Hollywood, California dated June 7, 1960, stated that the Porsche factory had agreed to have the 356 repainted free of charge. Amazing history with paper working and a logbook from 1959 to 1981. Mr. Andreoli owned the 356 for 45 years until 2004, the original owner sold his 356 to a well-known Southern California 356 enthusiast and collector, who kept this 356 for the past 16 years and eventually restored it with some of the best 356 experts in Southern California.

One of the most original, surviving 356A Coupes that we have seen, restored to the highest level by some of the best 356 experts in the world. Beautiful paint, interior, and brightwork restored to concour condition. Original body and floor pans, with perfect panel fit and gaps. All matching numbers with stampings in front hood, engine lid, and doors. Date stamped fuel tank, fuel sender, instruments, wheels, and other parts are all visible. It retains its matching-number engine and transmission. Mechanically in superb condition, with a very strong running 1600cc Normal engine, 716 manual transmission, and four-wheel drum brakes. It simply drives like a new 356! All of the original parts and chrome were restored. One of the finest 356A Coupes that you will find! A rare opportunity to acquire a two-owner, documented, matching-numbers, fully restored, late-production 356A coupe! Complete with Kardex, original sales documents, original service records, note binder with handwritten mileage & service entries, original owner's manual, tool kit, jack, and travel kit.