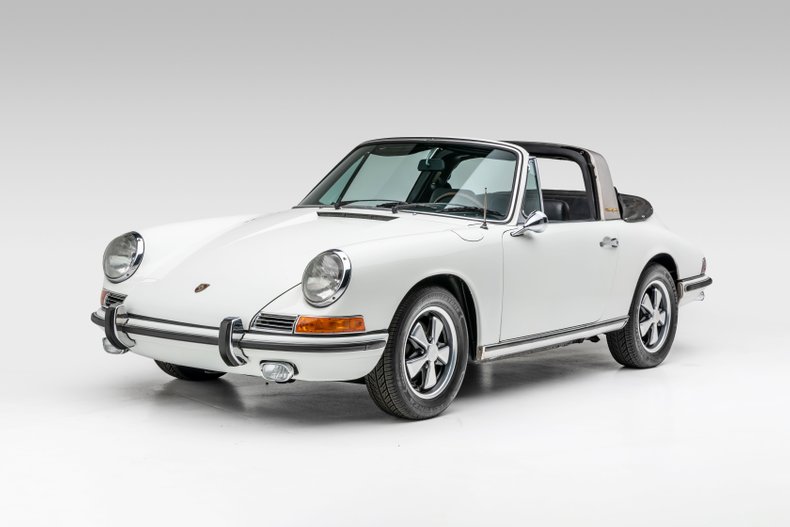 European Collectibles is pleased to offer this very rare 1968 Porsche 911S Soft-Window Targa. Although the “S” was not offered in the USA for '68 due to tightening emissions regulations, this one snuck in via a special order placed by Porsche Car Southeast, Inc. in Jacksonville, Florida. Upon arrival, it was shipped to the local dealer, RBM of Atlanta, Inc. and sold to its first owner, George Bonk, who kept the car until 2012, an amazing forty-four years. During his ownership, Mr. Bonk states that he had the engine rebuilt by famed dealer, Brumos Porsche. In 2012 this 911S was sold to European Collectibles in largely original condition. Some paintwork had been redone over the years from the doors forward to keep the car looking tidy, but the rear fenders on both sides have a significant amount of original paint. The black leather seats, which are in fantastic condition were reportedly removed from the car for several decades in favor of 1980s style Recaros, so they remain in very good condition. The rear seats, door panels, gauge, and dash appear original and are very good for being so, the carpets were redone in 2012 under our direction. Further cleanup work included the installation of a new Targa seal, refinishing the original (one-year only) 5.5 x 15” Fuchs Alloy Wheels and stripping the undercarriage to bare steel and reapplying the undercoating. Photos of the undercarriage work – before, during and after are available on request. Once the aforementioned work was completed the car was sold to a local collector who kept it at his residence until just recently selling it back to European Collectibles. This is a well-cared-for car with just the right amount of patina. In today's world where many collectors feel afraid to drive their perfectly restored cars, this amount of shabby is downright sheik. The repainted areas match the original paint pretty well and the body panel fit is excellent. The doors close with a beautiful ping. The engine fires right up, runs well and was recently serviced by a local specialist. The gearbox and braking system feel good. Included in the sale is a Certificate of Authenticity which confirms this car to be “matching numbers”, original owner's manual with rare s0ft-window Targa supplement, original window sticker, toolkit, jack, and spare tire.