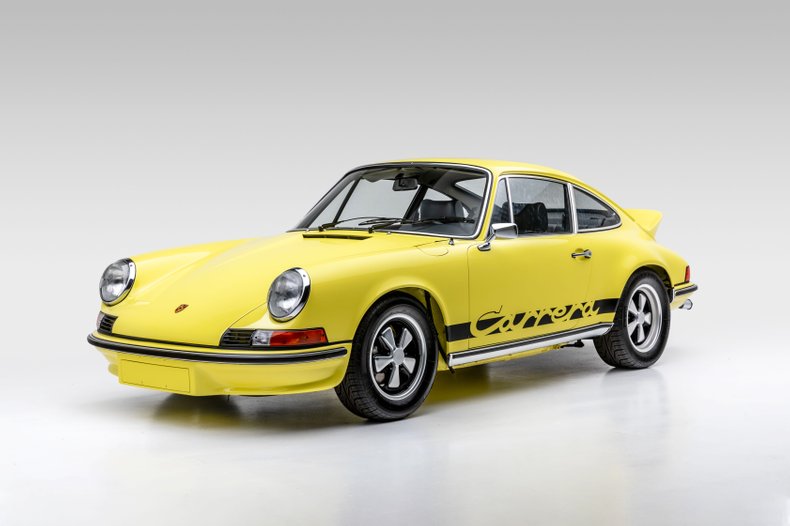 This 1973 Porsche 911 Carrera RS, VIN 9113601364, was completed at the factory in May 1973. The build specification called for Light Yellow paint a black leatherette interior, sport seats left and right, a manual antenna (left) with a front loudspeaker and noise suppression and Dunlop Tires. The Certificate of Authenticity on file also lists an additional rear apron (muffler skirt), but since this option isn't listed on the Kardex or in either of Dr. Konradsheim books, we assume the COA has a minor mistake.

Shortly after being completed (June 1973), it was sold to its first owner, Dr. Heisse & Co. of Germany. In September 1976, Heisse sold it to Fa. Herbert Hildebrandt who sold it to Kurt Hermann in February 1978. Hermann sold it later that year to Rolf Zander who owned it until October 1979 when it was sold to Wolf-Hendrick Unger.

Hendrick Unger has a longstanding history with Porsche and motorsports. He contested many marathon rallies in the 1980s including contesting Paris-Dakar Rallye twice in Porsche 959s. During his ownership of this car, which lasted well through the 1980s, he drove it as a support vehicle to Jurgen Barth and Roland Kussmaul in the 1982 Monte Carlo Rallye. Barth and Kussmaul finished 10th overall and 2nd in Group B behind a 911 SC. Amazingly the credentials and livery from that race are still with the car today. We have three magnets, one metal plate, and both front and rear license plates. They are in exceptionally well-preserved condition.

In August of 1988, the car was sold to a Japanese collector who imported it to Japan and did what any self-respecting Japanese RS owner would do, he had it painted white. Over the next twenty years, it remained in the same collection and was serviced by the local dealer. In 2008, the Japanese collector sold it Gregor Fisken of London and back to Europe the car went. After arriving at Fiskens, it was sent to European Porsche specialists, Maxted Paige and Prill, for a major service. While in their care (2008), a buyer was found and the car was quickly sold to their German client. In 2010 the German Client (Classic Motors GMBH) sold it via Coys to a Canadian who would own the car until it was sold to European Collectibles in 2019. This owner, a well-known Porsche collector, imported it to Canada in 2010 and left the car in its Grand Prix White/Blue livery until 2013 when a full nut and bolt restoration commenced. The stunning work that brought the car to the condition it is in today was performed by Jakobs who are well-respected “High Performance Porsche Repair Specialists.” From 2013 until 2015, every nut and bolt was restored or replaced as needed and all mechanical systems were completely rebuilt. We have over fifty pages of detailed invoices for the work performed by Jakobs, and the total cost was $196,693 CDN (equal to USD 185,650 using an average conversion rate for 2013/2014).

This is a beautifully restored 1973 Porsche 911 Carrera RS that is finished in its original color combination of Light Yellow with a black leatherette interior. It retains its original matching numbers engine, verified body number, and is complete with all options initially delivered. It has a thick binder that documents its entire life via an original German Fahrzeugbrief, import/export documents, Japanese records, restoration photos, restoration invoices, COA from Porsche and Porsche Kardex.