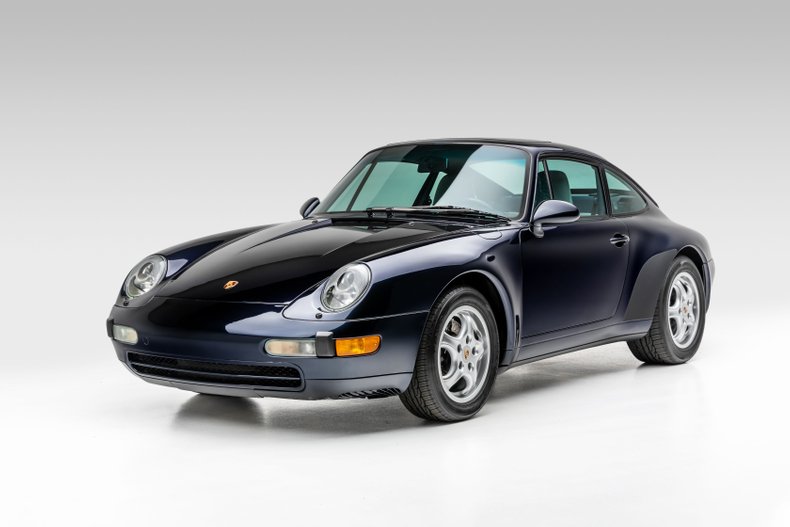 This Midnight Blue Metallic Porsche 911 was built in June 1994 and shipped to Forsyth Porsche in Winston-Salem, NC where it was sold to its first owner, Mr. Wasmer on August 31, 1994. He traded in his grey 1989 911 Coupe towards this car and we have an original picture of the two 911s sitting next to each other at the dealership the day the trade was made. Three years later ('97) with 12,675 miles on the odometer, it was sold to Mr. Topken of Tennessee. In 2002 it was sold to its third owner, Mr. Ginsburg with 23,914 miles. He kept the car fifteen years and accumulated over 8,000 miles. The fourth and most recent owner purchased the car from a dealer in March 2019 with 32,015 miles.

The exterior paintwork is in very good condition overall with some stone chips in the nose and a defect in the fiberglass bumper from when it flexed and marked the paint. We have measured the paint with a thickness gauge and have found it to be 100% original and very good for being so. The interior, which is all original as well is in very good shape and really only showing wear on the driver's seat bolster and a rub mark on the rear armrest. There are no modifications of any kind and this 911 runs and drives just as Porsche intended. It is responsive and fun, while also being comfortable. It is rare to see such an early car with Limited Slip and ABD, but these are welcome performance items that Porsche offered. All services are up to date with the most recent major was performed less than a year ago (32,015 Miles) and included new valve cover gaskets, an oil filler piper, new fender stone guards, and four new tires. This lovely 911 is complete with two keys, the original window sticker, owner's manuals, tool kit, jack and spare, anti-theft radio card, original key card, a 35mm picture of the day it was sold new and a binder full of service records.