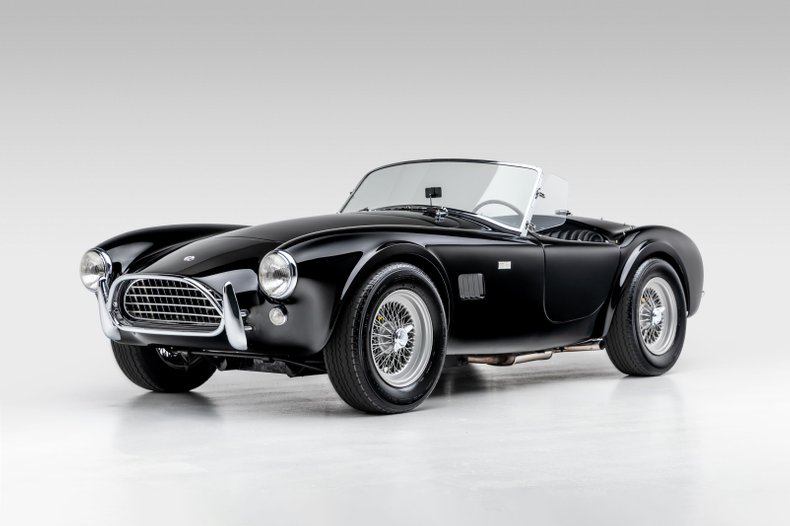 The car was delivered to NY via TWA airfreight. It was bought by John B King, a student at nearby Storm King School who had recently received an inheritance. King purchased CSX2521 and enjoyed it for roughly 15 months before trading it back to Larsen Ford on CSX3129 in 3/66. Bill Whitley (Endwell, NY) purchased the car in 8/67. Whitley purchased a paint job, some new trim pieces, new side curtains, chrome wire wheels, a hardtop, spare brake pads, an aluminum intake and a 715 cfm Holley carburetor. After 30 years of ownership, CSX2521 had accumulated an additional 32,000 miles and had its engine, clutch, suspension and ancillaries rebuilt. It was shown by Whitley at SAAC-18 (Watkins Glen, NY) with a lot of patina. Whitley advertised CSX2521 for sale in '99 with the following description: Green/black all #s match including engine; owned since '67; basically unrestored original street car with 40,000 street miles by present owner; all extra parts go w/car including prig, used and new items: hardtop, soft top, radio, rims, emblems, intake, carb, oil pan, shifter, & exhaust system; currently running aluminum intake and 715 Holley; asking $150,000. CSX2521 was purchased by Jim Farley who was living in Belgium at the time. Prior to shipping overseas, the car went to noted Cobra expert, Bill Kemper, who freshened many areas including brakes, gauges, carpets, some paintwork and detailing of the trunk and engine bay. When Farley moved back to California in '02 he had the car stripped to raw aluminum, painted black and fitted with Kidney Bean alloy wheels. In '04 Farley sold the Cobra to Ed Mazula of Torrance, CA. A year later after regretting the decision, Farley reacquired the Cobra via a trade that involved CSX3246. This time around, Mr. Farley kept 2521 until 2010 when it was offered for sale by Canepa Design. It was offered with a summary of the history along with the statement that it had just received a full mechanical service and cosmetic detail to Concours standards. “This wonderful 289 Cobra is spectacular in every aspect.” It was acquired that year by the present owner who gave a Ferrari 206 Dino and some cash. After his purchase he had it shipped to Hawaii where he used it regularly on Maui. In 2017, the original engine and gearbox were removed and shipped to Jim Grubbs Motorsports of Valencia, CA for full internal rebuilds and cosmetic restoration. During the rebuild, all of the right updates were made such as the use of MSD ignition, hardened valve seats for unleaded pump gasoline, ARP hardware, one-piece rear main seal conversion, modified oil baffles in the factory valve covers for roller rockers and a hydraulic roller camshaft. Once completed and broken in, Dyno tuning followed with impressive results with peak torque of 336.8 at 3,600 RPMS and 294.1 horsepower at 5,500. The aluminum Borg-Warner T10-L transmission was disassembled, overhauled, resealed and mated to the engine via a new Centerforce clutch and fitted with a Hurst shifter. Once back in Hawaii, the drivetrain was reunited with 2521 and road-tested with spectacular results. In February 2020, the Cobra was shipped to European Collectibles where it was inspected and detailed. The aluminum body is one of the most original we have seen. Thanks to the long-term care of Mr. Whitley, this particular Cobra has never suffered from silly modifications such as 427 style fender flares, holes in the body for a roll bar or a giant hood scoop. The black paintwork shows beautifully, and the exterior chrome is very good. The interior has just the right amount of patina. Painted wire wheels are shod with vintage-appropriate Avon performance tires and mounted via chrome knock-offs. This is an excellent opportunity to purchase a 289 Cobra with its original driveline, the more-desirable rack, and pinion steering and an excellent history. It is complete with spare tire, correct jack, grease gun, brass hammer, tools, correct distributor, correct carburetor, correct shifter, correct washer bag, tonneau cover, soft top, and bows.