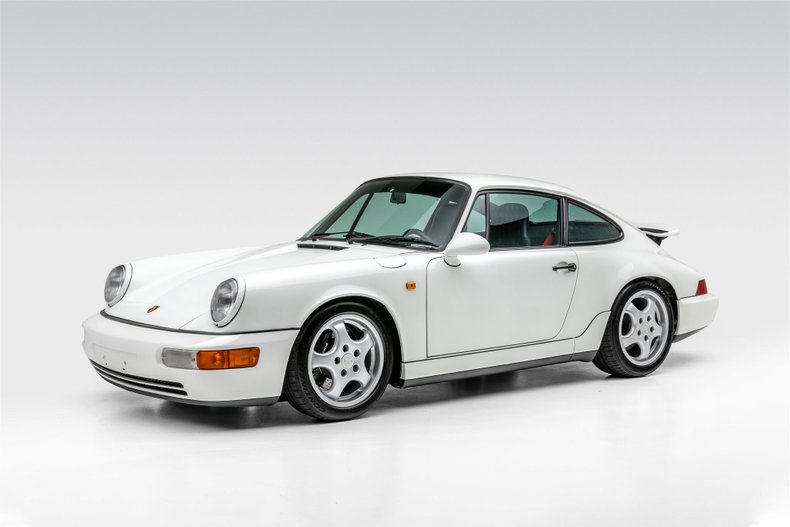 The 964-based Carrera RS was unveiled in 1992 as a limited-production, lightweight high- performance version of the Carrera 2 production car built to satisfy the many marque enthusiasts who demanded a new and modern successor to the wildly popular but low-production Carrera RS 2.7 of 1973-1975. Porsche produced a total of 2,276 examples of the 964 RS; 1,910 of those were stripped "Basics," also sometimes called Lightweights, designed to be highly responsive street or track cars with no luxury options available. There were also 290 N/GTs or "Sport" models for racing in the BPR GT Group N series and for owners who wished to participate in track events; and another 76 in "Touring" trim, with different and unique seats, full interiors, sound deadening, and luxury options like AC, sunroofs, and power windows, more suitable for everyday street use.

The new RS closely followed the path of the 964 Carrera Cup racers. The RS packed an M64/03 air-cooled, dry-sump horizontally opposed SOHC six-cylinder modified to produce 260 hp at 6,100 rpm with 240 foot-pounds of torque at 5,000 rpm. Power was delivered via a single-mass sport flywheel to a G50/10 five-speed gearbox with steel synchronizer rings, altered shift sleeves, and taller first and second gears. A ZF asymmetrical limited-slip differential delivered 20 percent lockup under load and 100 percent lockup under braking.

The 964's electrically assisted steering was replaced with a manual rack. Niceties such as air conditioning, power-adjustable seats, cruise control, an entertainment system, and sound deadening and insulation were dispensed with, all in the name of weight reduction. The rear seat was eliminated, replaced with lightweight carpeting. All chassis seams were fully welded, and the 964's steel doors and front trunk lid were replaced with aluminum panels, and thinner glass was used for the doors and backlight. Driver and passenger enjoyed deeply bolstered bucket sport seats.

Chassis number 491103 is one of these rare cars, imported into North America from Japan in 2017. The Carrera RS is approximately 345 pounds lighter than the Carrera 2 model upon which is it based. It was prepared for the Japanese market, the Porsche Certificate of Authenticity confirms matching engine & transmission and notes that it was originally ordered with the following equipment:

Finished in the original color combination of Grand Prix White (color code P5) with a black leatherette interior and black and grey leather sport seats. The car has lightweight door panels with red seat belts & RS door pulls with manual window lifts. An attractive set of drilled aluminum pedal covers have been installed by a previous owner. With only 46,821 km (29,093 miles) from new, this Carrera RS remains in excellent condition inside and out and drives amazing! All original undercarriage and suspension with the original cosmoline. New Continental Extreme Contact Sport tires have recently been installed (205/50 ZR17 front & 255/40 ZR17 rear) along with a 4-corner balance and alignment done by Johnsons Alignment, and recent service. Offered with Certificate of Authenticity, original Driver's manual, Supplement 911 Carrera RS manual, black leather pouch, collapsible spare tire, air compressor, jack and work gloves. A chance to own one of the rare original Carrera RSs not originally available in the North American market – one of the most sought-after modern normally aspirated 911s that is a blast to drive!