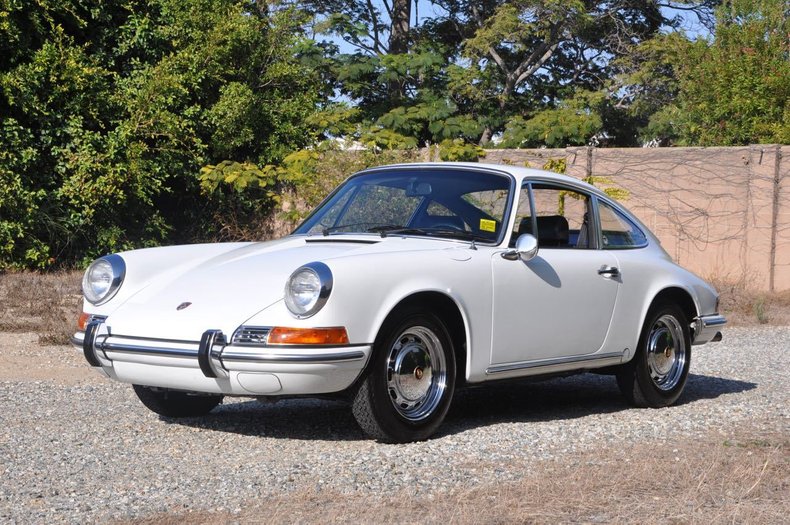 Put most simply, a 912 is essentially a 911-style body mated with a 356-derived 4-cylinder engine. The 356 was Porsche's first mass-marketed sports car. The Porsche 911 is the most successful sports car of all time.   Porsche's first production car, the 356, featured a distinguished, round, wind-cheating shape, and was powered by an air-cooled, 4-cylinder motor that addressed both performance and practicality. Between 1948 when the first 356s were hammered together in a former saw mill in post-war Austria, and 1965 when the last 356s rolled off the assembly line in Stuttgart, Germany, Porsche went from a design firm with lofty aspirations into a world-class auto manufacturer whose cars commanded a cult-like following. Although the 356 enjoyed four distinct evolutions during its 17-year run, each more successful than the last, Porsche had already begun looking beyond the 356 before the end of the 1950s.   By the late 1950s, there were some at Porsche who feared that the market for high-end, two seater sports cars might suddenly grow saturated, thus the car that would eventually become the 911 actually began life as a design study for Porsche's possible foray into the realm of true 4-passenger cars. The initial prototype combined some traditional Porsche styling cues with a much longer wheel base & taller greenhouse.

The success story of the 911 could be likened to lightning striking in the same place three different times, for how three generations of men each contributed to its creation. It was family patriarch and renowned engineer Ferdinand Porsche, designer of the Volkswagen Beetle amongst many his other accomplishments, who first aspired to build a sports car company bearing his family's name. Following Ferdinand's passing in 1951, his son Ferry Porsche built the fledging company into an international brand, and ultimately it was Ferry's decision to leave passenger car building to those who were already building passenger cars. Finally, it was Ferry's son, Ferdinand "F.A." "Butzi" Porsche who designed the 4-seater concept Porsche, and then following his father's mandate, reimagined it as a 2-seater version, which is what became the 911. When the new Porsche 911 was unveiled at the 1963 Frankfort Auto Show, it was widely heralded for its styling and technological innovations, and for how it evoked the company's iconic 356, despite being an entirely new car.

In order to power what was originally intended to be a bigger, heavier 4-seater car, the 911 came equipped with a bigger, more powerful motor. Whereas the 356 had an air-cooled 4-cylinder pushrod engine, the 911 came with a an air-cooled 6-cylinder cam-driven engine. Since the early 1950s, Porsche had produced a 4-cam version of its 4-cylinder motor that enjoyed great success in Porsche's race cars, and which, for a very substantial premium, could also be had in the special 356 'Carrera'. Initially, Porsche did not intend the 911 as a direct replacement for the 356, but rather as an attempt to expand the high-end niche market previously held by the 356 Carrera. Alas, when the public first saw the 911 in 1963, it instantly rendered the design of 356 dated and obsolete. To contend with the fact that their new elite 911 threatened to eclipse their mainstay 356, Porsche realized they had best somehow find a way to adapt the new 911 design into a successor for the 356. To accomplish this, Porsche experimented with putting the 4-cylinder pushrod motor of a 356 into the body of a 911, and after a few short months of testing, it was readily determined that this combination was a perfectly acceptable Porsche. Thus was born the Porsche 912.

Specifically, the new 912 came equipped with 90HP motor was a slightly detuned version of the 95HP motor that had powered its predecessor, the 356SC. However, despite this reduction of power, and despite the 912 being a heavier car, it was actually faster than the 356SC thanks to more streamlined aerodynamics and a more advanced suspension system.