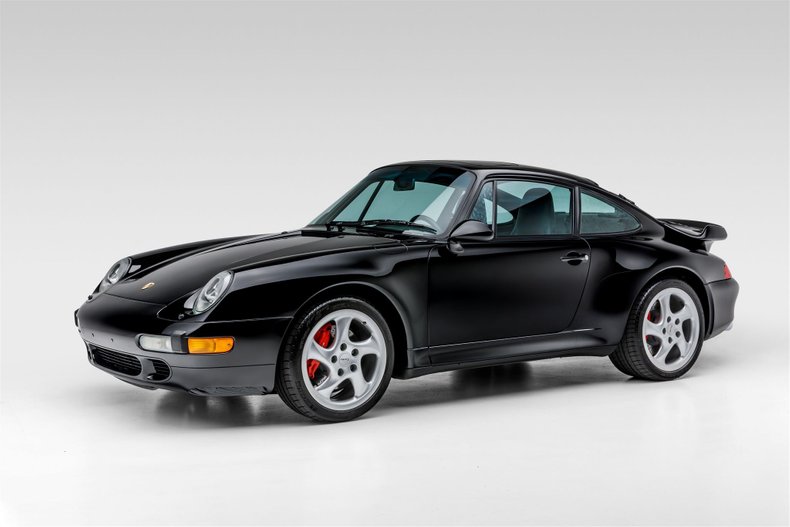 One of 739 Built for the US Market in 1997. Finished in a classic color combination Schwarz (black) with a black leather interior with only 13,946 miles from new. The paint is in exceptional condition & has been well preserved, the original leather interior is in pristine condition showing no wear. Mechanically the 3.6-liter Twin Turbocharged flat six-cylinder engine has 400-horsepower with a ton of torque, paired with a manual 6-speed transmission with a clutch peddle that is light as a feather as it should be. Properly maintained over the years by Porsche dealers for regular maintenance. Turbo brakes and suspension with 18” Turbo twist wheels and new Michelin tires.

The first owner titled the car in Cleveland, Ohio September 27, 1997, and drove just over 10,000 during the 3.5 years of his ownership. The second owner took possession on May 25, 2001, titled in Beachwood, Ohio, and had the Turbo regularly serviced at the local Porsche dealers over the 11 years of ownership, only driven 1,466 miles. The third owner purchased the car from Marshall Goldman Motor Sales in Cleveland, Ohio on March 12, 2012, and had the car shipped to Southern California. A full service was done by The Auto Gallery on November 21, 2012, at 11,902 miles. The fourth owner took passion on March 9, 2015, with 13,553 miles in Reno, Nevada, and had the car serviced twice by the Bill Pearce Porsche only driven 419 miles over 2 years of ownership. The fourth owner took possession in February 2018 and a service was done by Newport Auto Center (Porsche dealer) in Newport Beach, California. Newport Auto Center went through the entire car and took care of any issues needing to be addressed. A new climate control unit was installed in the dash, all new hard & soft brake lines were replaced along with a brake fluid flush, the oil fan resistor was replaced on the front oil cooler, the fan resistor for the A/C was replaced, four new Michelin PilotSport N3 were installed 225/40ZR18 front & 285/30 ZR18 on the rear. A new battery was installed last month and Auto Strasse a local independent Porsche service center recently inspected the car and reported a clean bill of heath after replacing the turbochargers return lines with the updated lines. The current owner has only driven this Turbo 156 miles over the past two years. It is like new and is an amazing driving experience with just under 14k miles. It is offered with original books, two sets of keys, tool roll, jack, and a clean carfax report.

The 993 Turbo represents the end of an era and the pinnacle of the air-cooled 911. The 993 Turbo offered elegance and muscle all in one package. Well established as an emerging collectible, the 993 is known for its incredible driving dynamics, performance, and iconic looks. This extremely desirable and highly coveted 993 Turbo should not be overlooked by any enthusiast. Last of the air-cooled 911 Turbo built, a true collector 911!

History of the 993 turbos 1996-1997
The 993 Turbo Coupe was released in 1995 worldwide with the exception of the United States. The production run for the United States was from 1996 through 1997. It featured a new turbocharged engine displacing 3.6 liters producing 402 horsepower. Twin turbochargers and air-to-air intercoolers, electronic engine management, redesigned cylinder heads, and other modified engine internals were used. The 993 Turbo was the first Porsche Turbo with an all-wheel drive. The electronic engine management helped the Turbo to achieve fuel efficiency far superior to any of the previous production Turbos. In connection with two catalytic converters and an on-board-diagnostics-system including four oxygen-sensors, it also made the 993 Turbo the cleanest sports car at its time. The Turbo's bodywork differs from the Carrera body by widened rear wheel arches (approximately 6 cm), redesigned front and rear bumper moldings, and a fixed rear wing housing the intercoolers. New 18-inch (460 mm) alloy wheels with weight-reducing hollow spokes were standard.