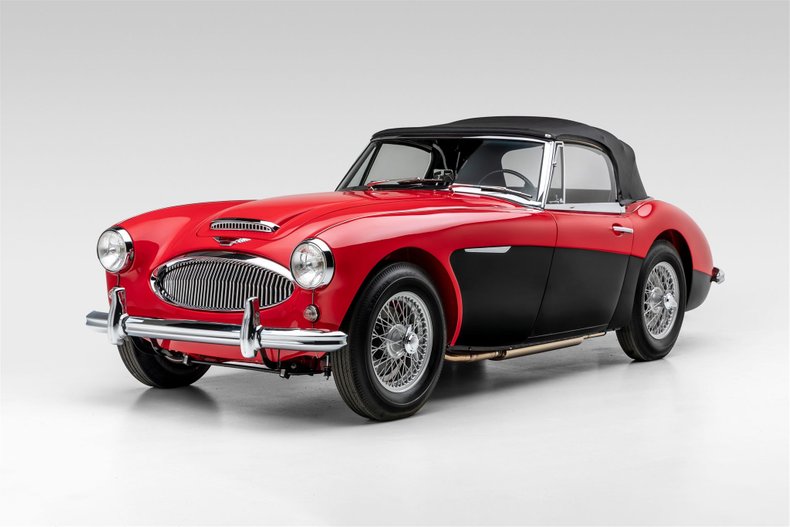 The Austin-Healey 3000 Mk II BJ7 was a much-improved version of the earlier 3000 models in terms of comfort, practicality, and reliability. In terms of comfort, it was, for the first time ever, a fully functioning convertible that could easily be operated by one person and fitted with frameless roll-up windows and vented quarter windows. The inconvenience of a removable top with separate frame and side curtains was a thing of the past. On the mechanical side, a new camshaft increased performance by adding torque. Another change (that is often misunderstood) was the change from a triple-carburetor set-up to only using two. While that sounds like a step down in performance, only one horsepower was lost, and the modified setup made the car much easier to live with at low speeds and required less maintenance. Additionally, new front spring rates and stiffer dampers increased stability and comfort.

The beautiful BJ7 that you see here was built on September 10-12, 1962, and shipped to the United States on October 23 of that same year. It was originally finished in Colorado Red as it is today and fitted from the factory with wire wheels, adjustable steering column, black tonneau cover, Roadspeed Tyres, laminated windscreen, with a US speedometer and overdrive. It was the subject of a thorough restoration that began with a very solid original car. The work began in 2017 in a private restoration facility in Chicago that is busy year-round working on cars for a single collector. His in-house craftsmen have tackled many British and American cars over the years and have achieved award-winning results. The body was stripped to bare metal and required minimal rust repair. The Colorado red paintwork over black is absolutely beautiful and is complimented by a black interior with red piping. The matching-numbers engine, gearbox and all ancillary mechanical and electrical systems were all completely rebuilt or replaced. The work was completed in 2020 and has had only break-in miles.