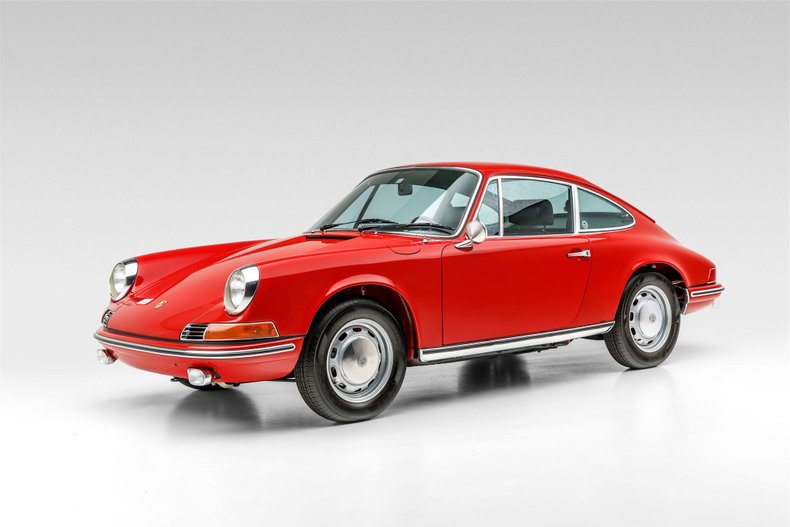 The original owner, Mr. Holthaus ordered a 1969 912 Coupe finished in (6802) Polo Red with a Black interior for $5,018.25 with the following options: U.S. equipment, 5-speed transmission, ventilated chrome wheels, bumperettes front/rear, tinted glass all around, antenna, Blaupunkt radio “Frankfurt US”, and crest hubcaps. Mr. Holthaus took delivered on November 29, 1968, from Porsche Car Distributors, Inc in Culver City, California. John F. Holthaus was an active captain in the military. The 912 received its first service at Kuper Volkswagen, Inc. in El Paso, Texas with 1,578 miles. Over the next five years, Mr. Holthaus drove the 912 over 40,000 miles based out of Fort Ord, California. By 1976, Mr. Holthaus was stationed at various locations across the U.S. and wherever he went, so did the 912. He settled down and spent the rest of his years in Tinton Falls, New Jersey. In the late 2000's Mr. Holthaus finally decided to pass on his beloved 912 for someone else to enjoy. Nearly a decade later the 912 was purchased by a Porsche enthusiast who wanted to do a full restoration.

In 2014, the entire chassis was stripped down and sent out to be media blasted. Shortly after the vehicle was sealed. Unable to continue with the restoration the 912 was sold in as-is condition in 2017 to Mr. Bustamente, who finish the restoration. Paintwork was completed by a local shop in Northridge, California. Interior was done by a long-time employee of Autos International, Heraldo Hernandez. Gauges were completely restored by Palo Alto Speedometer. The engine received a top end rebuild with an 86mm Big Bore Kit. In late 2018 the 912 was taken to Gold Coast PCA Concours d' Elegance where it won second in class “Judged”.

Finished in the original color combination of Polo Red with Black interior. This 912 has excellent paintwork and a beautiful German interior. Excellent solid and rust-free example. Complete extensive paperwork from the original owner including original drivers manual, Porsche maintenance record booklet, Porsche tourist delivery order, service records from 1968 - 2018, and Certificate of Authenticity. The 912's continue to increase in popularity and very few of them have a documented history such as this car. A very rare opportunity to purchase the last year of the 912 in amazing condition.

History
As production of the 356-model concluded in late 1965, Porsche officially began production of the 912 Coupe. Styling, performance, quality construction, reliability, and price made the 912 a very attractive buy to both new and old customers, and it substantially outsold the 911 during the first few years of production. Porsche produced nearly 30,000 912 units.