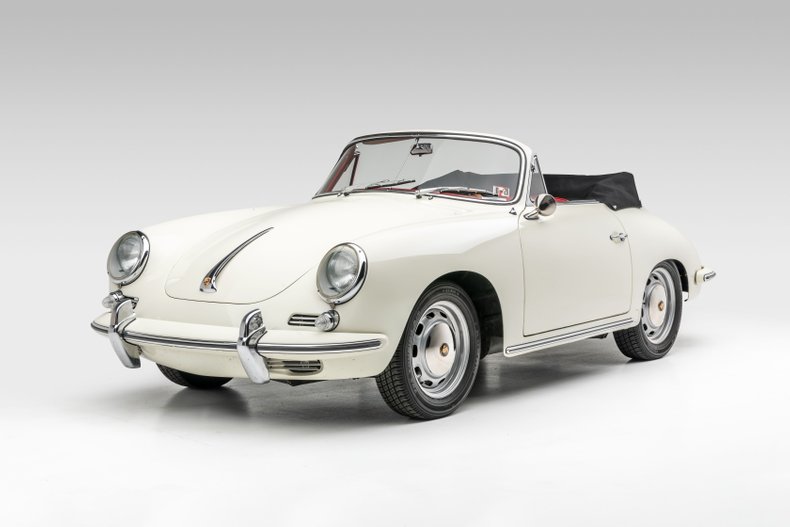 European Collectibles sold this 356SC Cabriolet to one of our past clients in 2009. Over the years it has been restored including paint, chrome, interior, and mechanical. Finished in Light Ivory with a red interior. The engine & transmission were both completely rebuilt, mechanically it performs excellent, the matching 1600cc SC engine is producing 95 horsepower, 741 manual 4-speed transmission, and four-wheel disc brakes.

Complete with a tool kit, jack, original steering wheel, owner's manual, boot cover, and Certificate of Authenticity from Porsche confirming matching numbers. Truly one of the best driving 356 SC Cabriolets that you will find with no issues. Everything has been done, finished in a beautiful color combination, and truly a dream to drive!

History: One of the most desirable collector models is the 356 SC Cabriolet, introduced in September of 1963 for the 1964-year model. It was the best driving 356 built with plenty of horsepower! One of approximately 1,200 SC Cabriolets built. This 356 features all of the subtle improvements and updated details fitted to the 356 over the 15 years of the production run. 1600cc producing 95 horsepower engine with 741 manual 4-speed transmission and four-wheel disc brakes. The SC Cab had to be special ordered directly from Porsche or from a local Porsche dealer. It was a premium in 1964 & 1965 and was close to $6,000. Approximately 1,200 SC Cabs were built for 1964 to 1965-year model making this 356 a very desirable model/year.