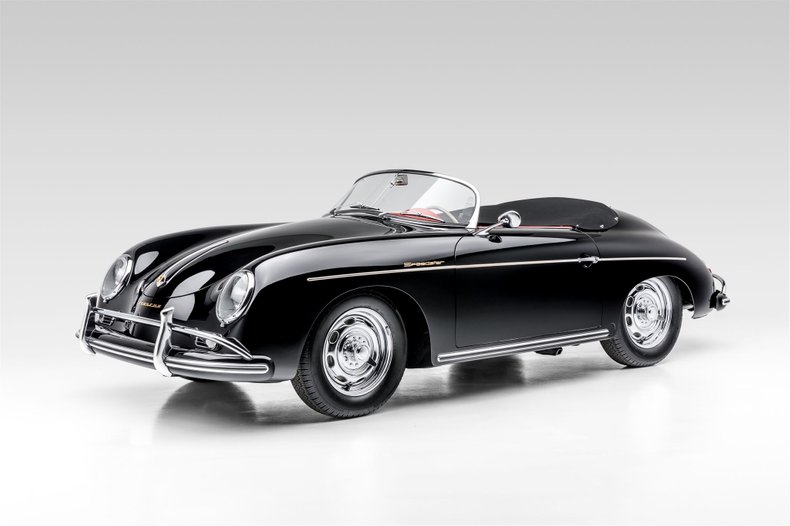 Originally finished in classic Black (color code 5701) with Red leatherette interior from the factory! Out of 4,145 Speedsters produced only 141 were special ordered in Black and only 36 Speedsters were ordered in Black, out of only 555 built-in 1958!

European Collectibles did a full concour restoration with no expense spared over a 20-month period from 2018 to 2019. During the restoration, this 356 was completely disassembled so that every aspect could be properly addressed. The 356 was stripped down to the bare tub and it had minimal rust. The body and panels are original and still retain their matching numbers. All panels were pre-fit with bumpers, windshield frame and top to ensure the absolute best result. The complete driveline was rebuilt, engine, transmission, suspension, braking system, new wire harness, and fuel system. All the chrome was triple plated, all the components are OEM or NOS. Absolutely superb in every way, this 356A Speedster is ready for immediate road or concour use. Complete with an original tool kit, owner's manual, side curtains, boot cover, Classic Technical Certificate from Porsche confirming all matching numbers, Kardex, coffee table book of the complete restoration, and photo documentation of the restoration. Options include chrome Rudge wheels, US overrider bumpers, deluxe horn ring, and red seat belts Shown for the first time on Tuesday, August 13, 2019, at the Carmel-By-The-Sea Concours On The Avenue. Out of the eight Speedsters shown, this 356 took 1st in class. Truly one of the best 1958 Speedsters that you will find. Everything has been done, finished in a beautiful original color combination, and is a dream to drive!

History; One of the most desirable collector models is the 356 "Speedster", introduced in late 1954 after Max Hoffman advised the company that a lower-cost, somewhat spartan open-top version could sell well in the American market. With its low, raked windscreen (which could be removed for weekend racing), bucket seats, and minimal folding top, the Speedster was an instant hit, especially in Southern California.