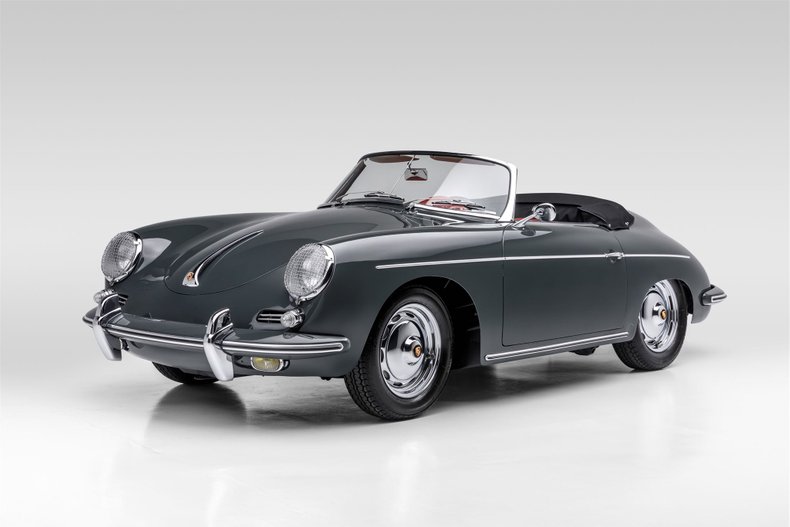 Completed September 30, 1959, by Drauz Custom Coachwork, this 356 is a California car with no rust, all original floor pans, and battery box. Excellent gaps, and panel fit with a very straight body. Mechanically, it is a blast to drive with its matching number 1600cc Super-90 engine (producing 90 horsepower) and smooth shifting 741 manual 4-speed transmission with four-wheel drum braking system, which have all been completely rebuilt. Beautifully restored finished in Slate Grey with a red interior, grey German square weave carpets, black German soft-top, and boot cover done by Thomas' Auto Trim in San Diego, California. Shown at the PCA Zone 7 Concours d'Elegance and scored 299.6 out of 300 in full concour.

Roadsters have become highly collectible, and quality examples such as this 356 come to market infrequently. This 356 Roadster is perfect for 356 club shows, Cars & Coffee or simply to enjoy with the top-down for weekend touring.

History: Porsche's popular 356 Roadster was introduced for the 1960 model year as a replacement of the one-year-only Convertible D, the Speedster's more civilized successor. The new T-5 Roadster brought several marked changes in appearance: The front fenders and headlamps were raised, as were both the front and rear bumpers, to better deal with urban parking. New vertical bumper guards also helped in that respect. New brake-cooling intakes were added to the nose below the front bumper.